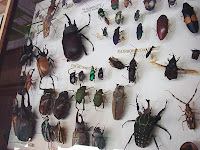 In the tradition of the satirical website, Stuff White People Like, I offer you the first installment of Stuff Political Scientists Like, which I will offer in irregular installments if political scientists like it. This seemed only appropriate since in the words of the author of that website: “It is important to note that a high percentage of white people also get degrees in Political Science, which is pretty much like arts, and only seems to have the word “science” in it to make white people feel better about themselves.”

Political scientists like “original datasets.” The topic is really unimportant. They simply want to know that you have spent copious amounts of time collecting new information about something or another. Political scientists are scientists, but they have become increasingly like entomologists. Your data set, however, should be machine-readable, not fastened by pins in a display case. That would inhibit its replicability. (See below.)

New datasets are important because they take time away from developing new theories. Political scientists, particular international relations experts, have grown tired of theories. They are all “non-paradigmatic” now with no prior assumptions or biases whatsoever. Everyone is getting along great. Theory was once something done by people on the East and West Coast in the days Before Fearon (BF), but it has been successfully eradicated from all places except the Continent. And no one understands what they are saying anyways.

Ideally your original data allows you to make an interesting argument, but this is not really crucial either. If it allows us to finally know something that is incredibly obvious but that we could not prove before, this is more significant. Like suicide bombers tend to blow up more people than non-suicide bombers. Or people fight harder for vital interests than for less vital interests. That’d be great. In your cover letter to academic jobs, you should begin, “Using an original data set, I ….” You will get an interview.

Another reason that the argument does not really matter is that political scientists really do not have enough data themselves. Their data is terrible. They want yours. Hand it over. Now. They’ll make it work for something.

Although the topic is unimportant, data collected in the most dangerous places on earth is best of all. This is because of something that political scientists increasingly like — intrepid field research. However, a year in the library basement coding Keesings archives’ entries will do in a pinch if you cannot get a grant or do not own a gun.

You should know that collecting original data has its downsides. First, your original data must be accessible to others so that they can replicate your utterly noncontroversial findings. Political scientists do not trust you.

Benghazi: What were the signs?