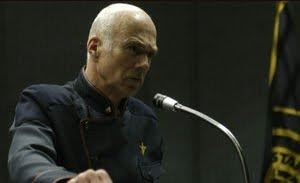 Starbuck’s away and has various guest bloggers filling in at Wings Over Iraq. David Costelloe of Never Felt Better is among them, and his latest post is one more for my dataset on BSG analogies in Egypt commentary.

In particular Costelloe argues Egypt can learn from the flaws in Colonel Saul Tigh‘s character and the absence of civilian supremacy it represents:

Let’s break it down. He shows hesitance when handed some responsibility during a crisis, at the cost of lives (mini-series). He displays open contempt of the government in public (Colonial Day). He is the lead officer in the actual coup of the government (Kobal’s Last Gleaming). When he is thrust into command, he loses the fleet (Scattered), nearly loses the Galactica to a Cylon boarding party (Valley of Darkness), utterly botches a crowd control operation resulting in civilian deaths (Resistance), openly taunts the imprisoned President in front of the government (Fragged) and basically takes orders from his wife.

He assaults a member of the media who is interviewing him (Final Cut). He later attempts to rig the Presidential Election in favour of Roslin (Lay Down Your Burdens). He takes the lead in a Kangaroo court that murders several people in the aftermath of the New Caprica escape (Collaborators). He begins to stir discontent among the crew (Torn). Despite being the XO, he ends up secluding himself in a drunken stupor that borders on a mental breakdown (Hero). He gives evidence at the trial of Baltar in a clearly drunk state (Crossroads). He hides his true nature as a Cylon from Adama and the government (“He That Belivith In Me”). He engages in an extremely inappropriate relationship with a Cylon prisoner, resulting in her pregnancy (Sine Que Non).

Oh, and of course, the drinking. Tigh is frequently drunk on duty and openly drunk off duty, resulting in a snappish attitude and disrespect towards fellow officers and crewmen.

Now, anyone of those things should be a dealbreaker. Tigh is a fairly appalling officer, his brief moments of competence not really making up for all of the above.

But the problem is that the Fleet is a sham-democracy, one that is fully under the thrall of the military. Roslin, despite being the Commander-in-Chief (unelected), hasn’t anywhere near the power to actually effect any change aboard the Galactica. When it comes to military matters, she is, by and large, a rubber stamp. William Gladstone said, on being a state leader “One must be a good butcher”. Perhaps the most well regarded President in history, Abraham Lincoln, was famous for replacing incompetent and ineffectual commanding officers. Laura Roslin is not Lincoln, and does not have the power to be.

…The Fleet is not a free society, it’s a military oligarchy.

Now I agree with nearly everything in his description of Tigh, and I agree Egypt has much to figure out as it configures its unique brand of civil-military relations, but I don’t agree this means the show as a whole argues for a military oligarchy rather than civilian rule. In fact, I’ve argued the opposite in a recent working paper. But what’s really interesting is that David Costelloe himself implicitly argues the opposite in an earlier post, accurately casting the Pegasus as a narrative device to illustrate the counter-factual in which Adama abandons Roslin and the fleet at Ragnar – the pivotal moment in the mini-series that I argue lays the foundation for the civilian-protection narrative that underpins the entire show:

It all goes back to the Ragnar choice. In the mini-series, Adama faces the choice of staying and fighting a hopeless war against the Cylons or running with what little of humanity is left. Pegasus, under Cain, faces the same choice. Adama chooses to run and Cain stays.

The difference is the presence of a civilian authority, in the form of Laura Roslin, who steers Adama away from the military choice. She doesn’t order him, it should be noted, but she convinces him the fight isn’t worth fighting. Galactica runs.

Pegasus stays and is an authority unto itself, lacking any kind of civilian control. In that way, Cain becomes God – in the fleet, the command is split, while in Pegasus it becomes committed to one person.

This dictator becomes anathema to the ideals of the Colonies (more or less the ideals of the United States) by running her ship like a madhouse with no responsibility: launching crazy attacks, executing her XO in front of the crew, abusing a prisoner. Galactica, on the other hand, has a civilian authority and the responsibility of a civilian fleet, to be a check and balance on any of its activities.

Well, which is it? I suspect that part of the problem is here is the narrative of civilian supremacy that Costelloe has bought into, one which assumes that civilian power unexercised signals civilian powerlessness. In his post, Costelloe repeatedly mentions the sack of McChrystal (and drubbing of generals by Lincoln) as examples of civilian supremacy rightly executed, but there’s an important difference between those events: Lincoln fired generals for incompetence, Obama fired a competent general for allowing his subordinates to vent about the civilian administration. I continue to believe this act was not only unnecessary but also a sign of Obama’s weakness, not strength, as a Commander-in-Chief.

By contrast, the civilian government on BSG stands up to military convention when necessary to protect the civilian fleet (what better example than the decision to assassinate Cain?) but doesn’t sweat the small stuff. This is consistent with the particular civil-military bargain struck between Roslin and Adama at the start of the series. I don’t agree with each decision or indecision myself, but I am not convinced that because the civilian government treats the military as a partner rather than a true subordinate on the show that this means BSG portrays a ‘military oligarchy.’

Instead, we may need to think past the civilian supremacy / military rule dichotomy to look at the variety of civil-military governance structures possible given the different circumstances in which states find themselves. In fact some of the more recent scholarship on civil-military relations argues precisely this.

Standing Up for Multiculturalism? or “Where I find myself agreeing with the Prime Minister of Canada and that the dirt won’t come off.”