Cana-dammerung: A belated final post on the Canadian Election

Well it’s been just over two weeks since the Canadian Election – and I am much overdue for the long promised third installment of the snoozefest series that I started. In some ways I’m glad I waited to write my reply: first, because I was contemplating throwing myself off of Tower Bridge. In a moment of panic on the morning after the election I formed the Government of Canada in Exile (please join!) but I think I have calmed down now and have a new appreciation for the UK visa renewal process. Second, because I wanted to actually spend some time thinking about the implication of Canada’s first majority government since 2006.

So, what did I think?

Basically nothing. I actively ignored it. I’ve been bogged down with exams, international affairs (that OBL thing) and not quite willing to face up to the fact that Canada just handed this guy a majority mandate.

So, what am I making up off of the top of my head?
Lots!

(For the too long/didn’t read crowd, this graphic should sum up everything up nicely.)

As a re-cap (just in case you were, for some reason, more interested in the bin Laden shooting) The centre-right Conservatives (Tories) got a solid majority government. The Liberal Party of Canada, lead by academic/public intellectual/did-not-come-back-for-you carpet bagging Michael Ignatieff, had its worst showing in its party history with only 40 seats. By comparison, in 1993, the Liberal Party had 177 seats (177!). Canada was one big red party. Instead, the New Democratic Party, lead by Mustachio-in-Chief Jack Layton, is now the leader of the Opposition which has never happened before and giving unfortunate choices in facial hair a new lease on life. 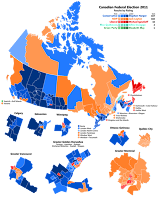 Finally, and perhaps the best news for Canadian nationalists since “money and the ethnic vote” helped keep the nation together, the Bloc Qubecois were completely decimated – going from 54 to 4 (FOUR!) seats. My extremely superficial comment on this would be that you can only be a one trick pony for so long, BQ; People want other things too.
Oh, and Elizabeth May, (a Yankee!!!)  the leader of Canada’s Green Party, won a seat , but the party did not do well overall as progressives apparently lined up to vote for the NDP instead.
A couple of interesting things here
For those of us who are (admittedly) anti-Harper (I’m guessing you’ve already figured that out), it may not be as bad as it seems. There was a lot of speculation that Harper might calm down once he got the majority government he craved. (This was the opinion of the Economist, and Globe and Mail.) He might. Apparently we’re back to calling the government the “Government of Canada” rather than “the Harper Government”. That’s nice. I hear Mubarak-style branding ain’t going very well anyways.

Additionally, beside the NDP, the Tories elected some new and interesting MPs – in particular Chris Alexander, the former UN-Representative and foreign affairs wunderkind. I only briefly met him once when he gave a talk in London, but those who know him better than I say very good things about him.

Yet after yesterday’s cabinet was unveiled, it’s clear that Harper has just kept pretty much everyone in the same place. Including – shockingly – Minister of International Cooperation Bev Oda in place. (Not much space here to go into the story – suffice to say she was found guilty of lying to Parliament, political interference into an evaluation process and really just being terrible.) Given that he has elected talent like Alexander, I find this HUGELY disappointing. My only hope is that he wants to get Alexander warmed up in his job as MP before he receives a government position in the next shuffle, probably in 12-18 months.

As for the one of the only big changes: John Baird, the Tory rabid-seal-insta-shout-hack-attack-machine-on-two-legs, you can read my hysterical reaction here. Poor DFAIT. Pity the workers there, my internet friends. The only hope here is that Baird’s good relationship with Harper means that we might actually get something of a coherent foreign policy – a much neglected portfolio.

In effect, all of this means that he’s opted for continuity (and I would say incompetence) rather than change.

More griping to come, I’m sure. In the meantime, I will probably keep most of my Cana-blogging over at the Cana-blog while the drinking struggle continues.

The Pernicious Myth of America as Global “Manager”