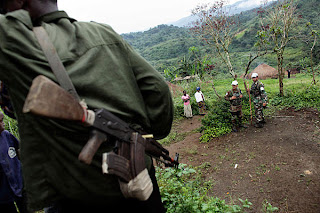 I have not yet read the new report on rape in the Congo, but judging from the news coverage of its reported findings, I have three thoughts:

1) I am not as concerned as some critics about the methods used (a population sample of household interviews) or the staggering results: 400,000 women assaulted in a single year. I am concerned about the comparisons to the US (or other countries) since unless the same methods are replicated in the US (or other countries) there is no way to compare rape rates or to accurately call Congo the “rape capital of the world.”

2) Though the emphasis is on the number of rapes committed by soldiers, the report also shows that nearly a quarter of the rapes recorded were perpetrated by the women’s husbands or domestic partners. This is consistent with earlier Oxfam data that demonstrated the majority of rapes in the Congo between 2004 and 2008 were perpetrated by civilians, not soldiers.

3) Since patterns of sexual violence against men in the Congo are better documented than in many other conflicts, it is particularly surprising that this study focuses only on women, and only on women “of reproductive age.” This promotes a troubling stereotype about rape and rape victimization.

Jason Stearns, who has been writing and blogging up a storm about Congo this past week, is the first to point out that the social construction of the rape angle has been as much about selling the Congo story to Western grassroots constituencies as about reporting the conflict accurately.

It’s hard to know from his various op-eds and articles where Stearns actually stands on this. At Foreign Policy, he argues that it was only when John Prendergast‘s Enough Project stopped trying to explain the conflict and started focusing on “rape and conflict minerals” that they were able to get Western publics interested in putting pressure on their elected officials. But at CSM, he points out “Congo is More Than Rape and Minerals” proposes a point by point list of pitfalls journalists should avoid in writing about the Congo, not least is simplistic protrayals of rape:

Some Congolese are unscrupulous and vicious, but they usually have reasons for what they do. If we can understand why officials rape (and it’s not always just as a “weapon of war”) and why they steal money (it’s not just because they are greedy) we might get a bit better at calibrating solutions. Of course, it’s much harder to interview a rapist or a gun-runner than their victims. But don’t just shock us; make us understand. Otherwise we only have ourselves to blame when we react to a rape epidemic by just building hospitals and not trying to get at the root causes.

So it sounds like the most important report on rape in the Congo is one that hasn’t been written yet: in which perpetrators themselves are systematically interviewed. Actually, political scientists have already blazed a trail here: in this study, authors Maria Erikkson Baaz and Maria Stern find among other things that Congolese soldiers see ethical distinctions between different types of rapes.

That kind of insight might not be so useful for advocacy purposes in the West, but it might help aid workers, peace-keepers and protection specialists in the Congo in their prevention efforts – at least vis a vis military perpetrators. (As Laura Seay details, advocacy attention to a problem doesn’t by itself ensure the policy outcome you want – for that, you need to understand the situational context.)

Who are the Chinese companies working in the Congo and what have their experiences been? Did you know that Congo was one of the first countries to experiment with mobile cash-transfers to pay for demobilized soldiers? Have you checked out the famous artist studios in Kinshasa of Cheri Samba or Roger Botembe? The country’s tax revenues have doubled over the past several years – how does that square with its corrupt reputation? What are Dan Gertler’s financial relations with the Israeli right-wing? The Kivus apparently produce 40 percent of the world supply of quinine – might be a story there.

The Lighter Side of Public Opinion Work