My Rules of War class this past Spring was an Honors version of the course, and to challenge my students I asked them to do original research on popular conceptions of international humanitarian law, an issue the International Committee of the Red Cross takes quite seriously. The assignment was to identify a concept in the rules of war, gain a firm understanding of the law, then identify a set of data on how people see those rules, and use content analytic or discourse analytic coding methods to study how far apart the representations of the law in text are from the rules as understood or represented in reality, and in which respects. It was a tough assignment!

The students were at liberty to choose any kind of text data they wanted. Some chose blog posts. Some chose news articles. Some studied internal DoD memos to try to understand the narratives of policymakers as they tried to implement the rules of war. One scoured the Star Wars Trilogy screenplays for evidence of inaccurate portrayals of just warrior-hood (see below). All were required to attend a coding workshop, explain their methods and their findings, and draw inferences about the dissemination of humanitarian law to the public, media and policymakers.

Having graded many an undergraduate paper in my day, I was mightily impressed by the quality of the papers I saw and the amount of effort and detail many of these students put into their projects. Below the fold are short descriptions of the five best papers in the class, with accompanying visualizations. Working papers are linked below. 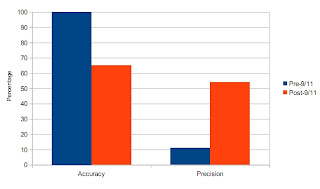 Dan Glaun snagged a summer research assistantship with me for this paper, in which he explores how news coverage of the Geneva Conventions themselves has changed since 9/11, in the context of agenda-setting theory. 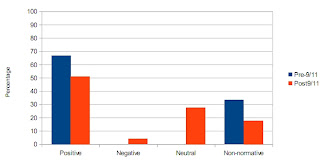 Dan tracks an increase in the overall salience of war law reportage in the US press, a shift in the referent point of the articles, and a corresponding change in the accuracy, precision and normative bent of the news coverage compared to war crimes reporting in the 1990s:

“In the two years preceding 9/11, there was not a single story which misrepresented the Conventions. However, only 11% of the stories were precise as well as accurate. The pre-9/11 newspaper reports tended to engage in generalities about civilian protection and war crimes, rather than citing specific sections of the Conventions or quoting significant excerpts from the texts. Post 9/11, however, the profile of accuracy and precision changed significantly. Accuracy declined from 100 to 65 percent, indicating an increase in media misrepresentation of the Conventions. Simultaneously, precision increased from 11 to 54%, including both accurate representations and specific, precise claims which were in actuality false. Among accurate articles post 9/11, 58% were precise and 42% vague. For inaccurate articles, 44% were precise and 56% vague. This demonstrates an acrossthe-board decrease in accuracy following 9/11. It also shows a universal increase in precision, both in accurate and inaccurate accounts.” 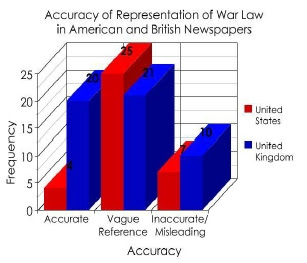 Christine Donovan examined jus ad bellum justifications for the Iraq war in not only press coverage but also US and British political speeches and statements. Christine examined both newspaper articles and political speeches for both countries and coded them not only according to how accurate, vague or misleading they were but also for what type of war law arguments were used to sell the war. 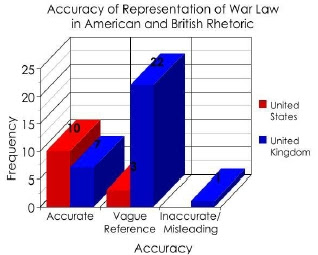 She found that overall both press coverage and political rhetoric in the US was less misleading than in Britain (and also relied less on arguments grounded in humanitarian law, such as Hussein’s treatment of civilians). She also found that the media and the public were far more interested in international law aspects of the invasion than the politicians were in making international law arguments:

“While the positive interpretation of UNSCR 1441 (as well as 678 and 687) appeared to have been the soundest legal argument for the United States and the United Kingdom to make, it was not the main focus of political rhetoric. This may have stemmed from the belief that, perhaps, complicated legal arguments would not resonate with ordinary people as much as weapons of mass destruction or human rights violations would. However, the strong focus on international law found in the selection of newspaper articles, especially those later on in the war effort for the United States and consistently in the United Kingdom, suggest that the public cares more about international law and the legality of the invasion than originally assumed. Perhaps United States and United Kingdom officials made an error by not presenting this legal reasoning to the public in depth, as it might have improved public opinion.” 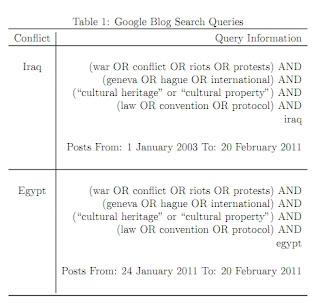 Wes Mason, who also worked with me on my Battlestar Tweet project, examined how well bloggers understood the law on cultural property as applied to both Iraq and Egypt. He finds some variation between Egypt and Iraq (discussed at more length) but also some general conclusions:

“My analysis shows that bloggers do not use particularly nuanced understandings of international law to make arguments about protecting cultural property in armed conflict, that they are far more likely to reference the Hague Regime than the Geneva Regime, and that they are even more likely to reference other laws outside the aforementioned regimes specific ally concerned with preventing the trafficking rather the destruction of cultural property.”

Sarah Wesley coded a random sample of 200 articles from the NYTimes, Al-Jazeera, WSJ and Huffington Post to explore to what extent the term ‘enemy combatant’ has come to be used interchangeably with ‘detainee.’ She found that the answer depended somewhat on the source – with Al-Jazeera six times more likely than the NYTimes to use the terms interchangeably, but also more likely to put the term ‘enemy combatant’ in quote marks when used, and far less likely to use it overall:

“On average, newspapers recognize there is a clear distinction between the terms ‘enemy combatant’ and ‘detainee’ and/or ‘prisoner of war.’ However interestingly, these news outlet did not often understand the differences between the terms.” 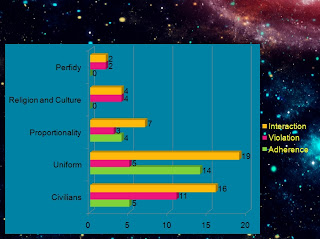 And last but not least, without doubt the juiciest paper of the entire lot was Shawheen Saffari‘s analysis of the Star Wars Trilogy, in which he finds a significant gap between portrayals of just conduct by the rebels and the standards of conduct required of actual rebels under humanitarian law circa 1977 and after:

“My analysis shows that the Rebels in Star Wars abide to war law in some cases but not all, including certain tactics that would be considered grave violations. While Rebels would generally follow law dictating accepted uniform and bearing of arms, the Rebels would frequently harm civilians in the majority interactions as well as show disregard towards civilian property that would be deemed culturally or religiously significant, violations specifically of Articles 13 and 16 of the AP II.”

Quick: how many war law violations can you find in this clip?

Must Men Be Pigs? The C*jones Conundrum