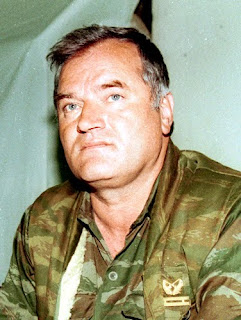 It’s hard to overstate the significance of Ratko Mladic’s arrest last night. Moreso that Slobodon Milsoevic, Serbia’s president during the 1991-1995 war of ex-Yugoslavia, and moreso that Radovan Karadzic the political leader of the Bosnian Serbs during the war, Mladic is reviled by Bosnian survivors of the conflict as the former leader of the Bosnian Serb Army. Though best known for his his calculated role in the war’s most infamous massacre of over 7,000 noncombatants at Srebrenica – along with the subsequent massacre at Zepa, this was his crowning achievement after several years of war marked by sexual assault, forced displacement, massacre and general butchery of civilians and detainees. Danger Room has a well-linked round-up of info on the snatch.

What I find fascinating about the international reaction to his arrest is the importance of this man being brought to trial. At no point I am aware of during his years of hiding was it argued that he should instead be taken out by a targeted killing – partly because it was recognized that justice for his victims required a trial. Recent empirical research demonstrates that these courts have not only been able to effectively carry out prosecutions, but have had a number of other important positive side-effects, with few of the negatives originally feared. I remain puzzled that the ad hoc tribunal model has not been seriously considered for KSM, OBL or other terrorist masterminds.