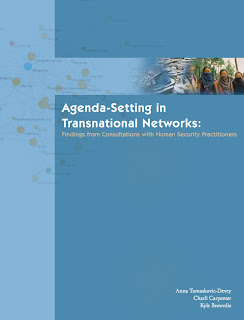 A couple of years ago I wrote a post entitled the “Top Twelve Emerging Human Security Issues of the Next Decade.” Those of you who have followed my writing know I’m especially interested in candidate issues that for one reason or another get neglected relative to others that end up being more prominent in global policy networks.

As many of you know, this is part of a longer book project on the politics of issue selection in advocacy networks. Since blogging from me will be slow for the next few months as I make headway on the book version of what I’ve found on that score, I thought I’d at least leave you with the slick glossy report version of a piece of the project: our descriptive findings from focus groups with human security practitioners.

We’ve written that report so as to be fun and easy to read by non-academics, but as an academic let me just highlight an interesting finding we downplay in that report, on the composition of the human security network itself. Roland Paris some years ago critiqued human security in a classic essay, arguing that human security is nothing more than:

“the glue that holds together a jumbled coalition of ‘middle power’ states, development agencies and NGOs – all of which seek to shift attention and resources away from conventional security issues and toward goals that have traditionally fallen under the rubric of international development.” 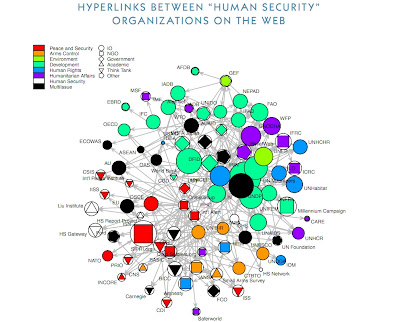 To me, these results suggest that Paris was both right and wrong. He was right about the human security network being a jumble of issue sub-networks. But he was wrong about development displacing security. What we are seeing is a fusion of and synergy across generally distinct global policy communities. In that sense human security creates cohesion among these disparate sectors precisely because it is a master frame, constituting a new landscape where issues at the intersections of these “silos” can be brought into relief. (Although it doesn’t always happen. More about that when the book is done…)

The Conduct of Inquiry: part the second of my contribution to a symposium