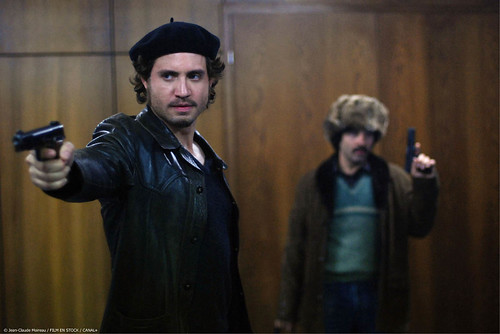 Cross-posted from my personal blog, by suggestion of a Vikash Yadav tweet.

I’ve now watched the first two parts of “Carlos,” a three-part French-produced television miniseries that was broadcast on Sundance this past month. Édgar Ramírez is terrific in the title (star-making) role, though his character is hardly sympathetic. The notorious terrorist is portrayed as an unusual killer — part playboy, part-diplomat, and part-frustrated middle-manager. Carlos is shown meeting with prominent international leaders and is called a celebrity by his fellow terrorists after the 1975 kidnappings at the Vienna OPEC convention. That event takes up a good portion of part 2.

Part 1 of the film opens with a statement warning that it is a fictionalized account and that only certain specific crimes were factually confirmed at trial. Thus, I was not sure of what to make of an alleged meeting in Baghdad involving Yuri Andropov (then-head of the KGB), Carlos and other desperadoes (one actor looked like Tariq Aziz). Allegedly, Andropov put a price on Anwar Sadat’s head at this meeting.

Indeed, one important element of “Carlos” is the relatively clear state sponsorship the terrorist and his various organizations enjoy throughout most of his career. Support from Libya, Syria, Iraq, Algeria, East Germany and the Soviet Union all figure into the terror incidents portrayed on screen. It is no wonder that the Bush administration, circa 2001, believed that state sponsorship was the key element of its anti-terror campaign (despite facts suggesting a completely different kind of threat). This was not a matter of IR theory privileging states.

As a movie, the Golden-Globe winning production is quite unusual:

The film’s scope, range and ambition are incredible; it’s set in at least 16 countries over a 21-year period, and at all times features the characters speaking the languages they would have spoken in the relevant situations—Carlos himself shifts effortlessly among Spanish, English, French, German, Russian and Arabic. An untold number of supporting and bit players pop vividly to life for however many moments they’re onscreen, and the film maintains an exceptional balance between a relentless forward movement and a certain artistic stability…

…the film is so convincing that it persuades you this is essentially the way it was. There are few so completely transporting historical movies, in that it drops the viewer down in another world and time without evident artifice, doctoring, nostalgia, revisionist thinking or overt political agenda. Those with a continuing stake in the causes involved or their own memories of the times can be counted upon to dispute this or that, but as a time machine “Carlos” functions brilliantly.

I can’t wait to watch part 3 — the decline and fall of Carlos, apparently.

Does Menstruation Explain the Gender Wage Gap?: A Kiwi theory