Goldstein: The World Has Never Been More Peaceful 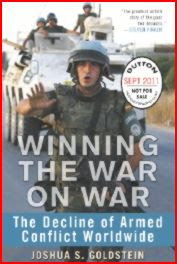 Joshua Goldstein has a must-read book in press entitled Winning the War on War. I’ve seen the advance version and like many things about it, not least of which is the easy-reading style pitched at an informed lay audience, the way he begins with a thought experiment rather than with a bunch of statistics, then draws the reader through available scholarly research in an entertaining way to develop his argument.

The argument: though the media and twittersphere often make it seem that the world is an unstable, dangerous place, we are in fact living through the longest and deepest period of peace in human history. According to the promo website:

Read the newspapers, and you’ll be convinced war is worse than it’s ever been: more civilian deaths, more rapes, more armed conflicts all around the world. But as leading scholar and writer Joshua Goldstein shows in this vivid, dramatic book, the reality is just the opposite…

Part of the book shows this to be true, part of the book explains why it is true (with a heavy emphasis on the role of peacekeeping and peace-building missions worldwide). But my favorite part is where Goldstein explains many people are so convinced it’s untrue.

In particular he breaks down a variety of socially constructed narratives about war and peace that have been promulgated by scholars, practitioners and the media over the years, including the statistic that 90% of war’s victims today are civilians, that the Congo war has killed 5.4 million people and that Congo is ground zero for the world’s worst sexual violence epidemic. (To quote Goldstein, “Not.”)

Joshua is also blogging nowadays and I urge readers to check out his posts. I expect the book will get lots of press and some critical reactions this Fall, and will be interested in readers’ thoughts as well.

Whither the Praetorian State?

Crisis and Change in International Organizations