Visualizing the “Misery” of Failed States 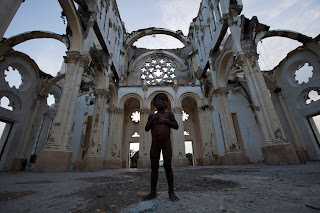 “Among your characters you must always include The Starving African, who wander the refugee camp nearly naked, and wait for the benevolence of the West. Her children have flies on their eyelids and pot bellies, and her breasts are flat and empty. She must look utterly helpless. She can have no past, no history; such diversions ruin the dramatic moment. Moans are good. She must never say anything herself in the dialogue except to speak of her (unspeakable) suffering.”

The FP photo essay plays into this too. Many of the photos portray those living in so-called failed states as helpless victims or maniacal militants. This is not to say that extreme conditions of repression, poverty, and violence are not prevalent in these states and it’s also important not to sanitize images just to protect our sensitivities. But the photos provide no context on the individual circumstances and strip those in them of their dignity. (See the photos of Haiti, Iraq, Kenya, Burma, CAR, especially). Nor do these pictures help us understand the causes and conditions of state failure and nor do they prescribe solutions. They simply invite shock and awe.

I teach a course on weak and failed states, and while I have the utmost respect for Foreign Policy magazine and assign their articles regularly, I don’t find much analytical value in this index. If anything, we spent most of the semester picking apart the index and pointing out the inconsistencies with scholarly analysis of failed states. And after delving more into individual case studies, my students were more critical of the generalizations and misrepresentations in the photo essay and articles. I’ll give you that teaching about failed states is tough – not least because there is no consensus definition – but the key challenge is to avoid attributing all the world’s ills (terrorism, civil war, poverty, transnational crime) to the amorphously defined “failed states.”

I intend to plow through the index and articles and will post more thoughts in upcoming posts.

Groupthink at the IMF?