Who Will Arrest Gaddafi? Not It! 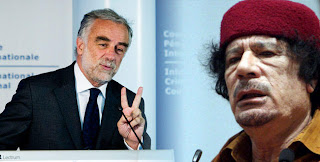 crimes against humanity (murder and persecution) allegedly committed across Libya from 15 February 2011 until at least 28 February 2011, through the State apparatus and Security Forces.

The judges believe there is “reasonable grounds” to attribute criminal responsibility to these three individuals for the deaths of (at least) hundreds of civilians during the protests. There are no allegations of the mass rapes Ocampo publicly suspected were being fueled by the distribution of Viagra, and human rights groups claim there is no evidence to support such claims yet. Ocampo indicated it’s possible that, upon further investigation, allegations of widespread sexual violence could be added to the charges.

So far there are a few issues related to the arrests warrants that are generating debate.

Skeptics of international justice claim that the ICC has complicated peace negotiations, that Gaddafi cannot be deterred, and therefore that the arrest warrants will leave him no option but to dig in his heels. For a typical articulation of this argument see Marc Thiessen’s post here – where he argues that the arrest warrants foreclose the possibility of Gaddafi’s vertical (voluntary) departure. Another variant of the skeptic position questions the timing of this judicial intervention, as Richard Falk criticizes here. He argues there is a political calculus behind the timing of the arrest warrant and essentially suggests that NATO and the ICC are colluding to wage lawfare (i’m not going to stoke the lawfare fire in this post).

Others, like Stewart M. Patrick at the Council on Foreign Relations, contend that these types of arguments present a false tradeoff of peace and justice. Human Rights Watch made a similar statement, which is consistent with their advocacy on international justice. David Scheffer makes the case at Foreign Policy to call of the missiles and send in special ops – to delink military and judicial intervention. Certainly there was never any indication that Gaddafi would negotiate and in that sense the ICC has a null effect. Realistic idealists (yeah – i just made that label up) would argue that no one expects Gaddafi to turn himself in or be deterred. But it is hoped that the ICC’s intervention will delegitimize his leadership and encourage and/or obligate other parties to arrest him. This is the real practical challenge….
States Parties to the Rome Statute are, of course, obligated to arrest Gaddafi if he enters their territory. President Bashir’s worldly travels tell that this option is unlikely. Ocampo’s statement made the most likely options for arrest very clear:

Libya has the primary responsibility to implement the arrest warrants. Libya is not a State Party of the Rome Statute, but it is a member of the United Nations since 1955. Libya has to comply with UN Security Resolution 1970…Gaddafi’s inner circle is the first option: they can be part of the problem and be prosecuted, or they can be part of the solution, work together and with other Libyans and stop the crimes.

Second option, the Interim National Council has expressed its will to implement the arrest warrants…International forces operating under UN Security Council Resolution 1973 have no specific mandate to implement arrest warrants and the Court is not asking for that…”

So there we have it. Except the rebel forces do not have the capacity and Gaddafi’s “inner circle” does not have any incentive (short of assured amnesties) to carry out these arrests. And while NATO diplomatically supports the arrest warrants, its mandate remains only to protect civilians and not to be contracted out as the ICC’s global police force. Maybe this will go the way it did for Gbagbo in Cote d’Ivoire, whereby the opposing rebel forces can grab Gaddafi with the logistical support of foreign forces and avoid a taboo form of regime change.