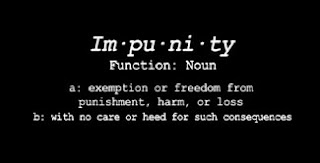 This is the first of a series of posts on “impunity gaps” in justice for atrocities that constitute genocide, crimes against humanity or war crimes. There has been a resurgence of optimism for international and transitional justice because the ICC’s judicial intervention in Libya and recent high-profile arrests and trial completions at the ICTR and ICTY. But I would like to shed some light on impunity gaps that persist for and within high-profile cases and for low-profile cases beyond the International Criminal Court.

An impunity gap can manifest itself in several ways:

Arguably, this doe not really narrow the universe of cases. Most countries that require justice for atrocities can, at best, achieve partial accountability because of a lack of capacity or political will. I will focus on impunity gaps that pose the greatest risk for a resurgence or entrenchment of violence and where political hypocrisy explains the gap.

Various factors can explain the irony that those “most responsible” for the “most serious crimes” are not held accountable. For example, is it pressure, or lack of it, from specific actors, such as the UN Security Council or transnational civil society, that determines whether massive crimes against civilians will be exposed and punished? Kenya, Sri Lanka, Colombia are excellent studies here. Does the sequencing of peace and justice matter, as some contend is a factor for Libya, Sudan, and Uganda? What of the nature of the conflict, whether civil war or genocide, and how the violence ends, whether through negotiation or the decisive defeat? Cambodia, Rwanda, and Burundi reveal interesting dynamics in these respects.

The purpose of these posts is not to throw a cynical wet blanket over what is undoubtedly institutional and moral progress in international justice, but rather to call critical attention to individual cases of impunity gaps and identify patterns across them.