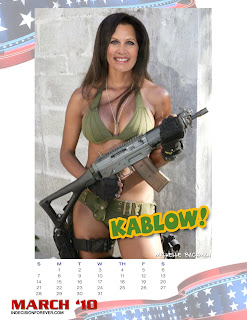 Recently I offered an “argument” about what conservative males find attractive about Sarah Palin — her attractiveness — and I provided some “evidence” by reference to the parallels between pretty female candidates and women sideline reporters with two XXs (Chromosomes, you creeps! Get your mind out of the gutter!). I made the claim that Bachmann’s support rested more on her craziness than her beauty, but then I found this. I am recalibrating my argument…..

But I want to push the analogy further, and ask — who gives a f*#k about the Iowa Straw Poll? Why, when Michele Bachmann wins, do they drop confetti? Don’t they usually wait to the convention for that? Winning the votes of 4,000 Iowans now gets you what American GIs had to fight the Battle of the Bulge for? Is ticker tape that much cheaper these days, that we can just use it wily-nilly?

I realized that a similar th 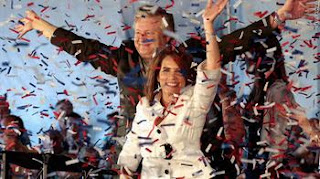 ing is happening on the NFL football field. It used to be that before a game the announcer would simply introduce the visiting team, it would run out, and everyone would boo. Then the announcer would raise his voice and cheer for “YOUR [insert city and mascot].” Everyone would cheer. And then they would play a football game. At the Super Bowl, though, they would bring giant inflatable helmets and place them in front of the tunnel to the locker rooms. They would shoot off fireworks when the teams came out. This added to the pageantry (wc?), the significance (wc?) of the ultimate game, the fight for the championship.

Now everyone has got an inflatable helmet for every regular season game. For all I know they use it in the preseason. It’s exactly like dropping confetti at the Iowa Straw Poll, a game that doesn’t mean a thing (unless you are Tim Pawlenty). Why is everything So Very Important Now so that we are all spent, jaded and unimpressed by the final contest? Seriously, unless someone’s nipple slips out, I just don’t care. (Don’t get any ideas, Romney. That was metaphorical.) 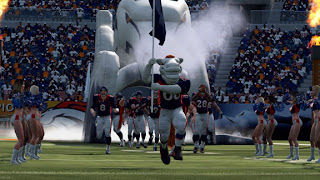 The same thing is going on at kids’ birthday parties. (Stay with me.) When I was a kid, the only place you found a bouncy house was at the State Fair. These were not available on an everyday basis, in your Personal Home. Maybe this is just Southern California, but there is a guy down the street with three kids who has a bouncy house three times a year in his backyard for every birthday. At my house, we put out some folding chairs in the backyard for the parents and turn on the sprinkler. The kids love it, but they are young. I know I am about two years away from a total meltdown when my son begins to demand a temporary rollercoaster be set up to mark the anniversary of his passing through my wife’s cervix. It’s just a birthday (straw pool, regular season game, etc)! I just want to understand this phenomenon.