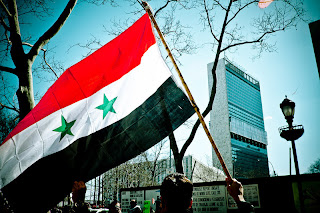 There is a near absence of calls for accountability in the international responses to the ongoing and escalating violence in Syria. Unlike in the Libya situation, where there was a swift UN Security Council Resolution mandating both the use of force and a referral to the International Criminal Court, influential states and human rights groups have yet to stand firm on either type of response for Syria. Is it simply premature or counter-productive to demand justice when violence has yet to cease? Or are the political and security implications of removing Assad greater than the risks of impunity?

There is some consensus that the scale and manner of the attacks by Syrian forces against civilian protestors constitute crimes against humanity and that President al-Assad is likely “most responsible” for such systematic violence. Estimates put the death toll between 1,600 and 2,000 so far. Comparable to other situations before the ICC, Syria would meet the “sufficient gravity” criteria that determine the selection of situations and cases by the Court’s Office of the Prosecutor and Pre-Trial Chambers. But the much less impartial political criteria that guide the referral of situations to the ICC by the Security Council are more strategic.

While the Security Council has condemned the violence and the US is calling for consensus on stronger measures, there appears to be little political will for an ICC referral. The US, UK, and France have been the strongest critics of the Syrian regime’s actions. China and Russia initially resisted endorsing UNSC interference but then supported the condemnations that were expressed in the Security Council’s first Resolution on August 3rd and are unlikely to block a future resolution. Moreover, the Arab world is now breaking ranks with Syria as many states, notably including Saudi Arabia, recalled their ambassadors and demanded Assad end the attacks.

The international diplomatic responses illustrate that most of the pressure is directed towards marginalizing Assad and his regime with sanctions, expressions of moral outrage, and encouraging an effective opposition in order to incapacitate and and delegitimize his leadership domestically. Accountability, responsibility, and justice are notably absent from the discourse and policies.

Even notable human rights groups are cautiously realistic about an ICC referral. While Amnesty International called for such action, the main thrust of its recommendations is for the UNSC to forego diplomacy and take stronger measures like an arms embargo and freezing the Syrian regime’s assets. Human Rights Watch makes similar recommendations, but stops short of calling for the ICC and instead presses for more cooperation with the OHCHR’s ongoing investigations and, short of Syrian cooperation, to establish an official Commission of Inquiry. David Bosco, blogging at The Multilateralist, questions HRW on whether it would support an ICC referral. Kenneth Roth responded: “Yes in principle, but as a practical matter it’s not realistically on the Security Council agenda yet….so we’re focusing on the accountability steps that currently are in play.”

But, in what amounts to little more than gossipy political intrigue at this stage, there are reports that an unknown Western government is “bankrolling” investigations into the crimes committed by the Syrian regime and ensuring they are credible enough to be put to use in an ICC trial. The fact-finding mission is being carried out by interviewing Syrian refugees in neighboring countries. See Mark Kersten’s post here, blogging at Justice in Conflict, on why this is a sketchy way to politicize and undermine the ICC.

The strategic imperative and lessons learned from the mess of simultaneously combining judicial and military intervention in Libya are undoubtedly undermining support for justice in the short term. Many fear the political and security implications of removing Assad via a negotiated exit or trial. He is a slick autocrat whose regime’s propaganda convinces citizens and foreigners that his rule keeps the pin in a bomb of potential sectarian violence and economic instability. For now the calls for accountability will remain isolated in diplomatic back channels and the blogosphere until politics and principle align for the Security Council.