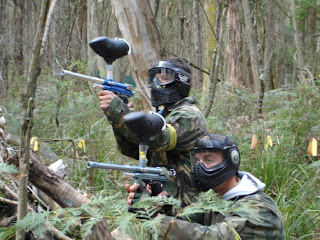 Syllabus-revamping time this year coincides with the last few quiet, pre-soccer-season weekends available for paint-balling with my son. With both BT Omegas and class prep on the brain, thought I’d reach out for ideas on how to integrate class trips to the arena into a course on the laws of war.

I’ve done this once before, when I taught “War and Gender” back at Drake University. In that case, the students organized it as an experiment in sex-specific tactics on the field. They ran variations, pitting all male and all-female teams against one another, or working in mixed-gender teams. It was voluntary, so more boys showed up, though the girls who self-selected in were just as likely to beat the boys. There was also some ‘finding’ that teams with girls on them were more cooperative and less devil-may-care. I used it mostly to help them think critically about making inferences from small-N non-controlled experiments, but it was also great to see them self-organize some class-related fun.

I’ve also known a colleague or two to use paintball a little more systematically as a pedagogical tool. At the same time, I don’t know how common this is and haven’t seen an article in International Studies Perspectives or anything describing the value or pitfalls of this approach for different kinds of classes.

So my bleg is three-fold.

1) First, have any Duck writers or readers used paintball pedagogically (or been in a class where it was used) and if so how did the prof make it work as a teaching tool (v. just a fun class-building activity)?

2) Second, is anyone aware of scholarly articles or resources on using paintball to teach international relations, international security, or military affairs? (I’m certain there are military and law enforcement training materials that use paintball to teach small-unit tactics, but what I’m looking for is pedagogical strategies for supplementing liberal arts political science courses with paintball for students who like to study war but may have never picked up a gun.)

3) Any specific ideas on teaching Rules of War in particular through paintball? The course is about the Geneva Conventions and more broadly the role of ethical norms in armed conflict. Here’s a link to last year’s syllabus.

4) If you think this is a horrible idea (particularly as a required activity) please expound.

Crimes in and of Famine