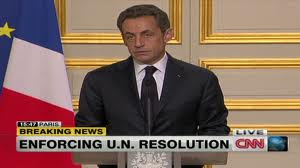 According to al Jazeera’s English language website, French President Nicolas Sarkozy and Mahmoud Jibril, head of the National Transitional Council, met on Wednesday to discuss what a post-Gaddafi Libya would look like. After the meeting, Sarkozy told reporters that NATO would continue its military operation in Libya as long as Gaddafi remained a threat, stating:

“We will continue acting within the mandate given to us by the UN to protect civilian forces.”

If President Sarkozy was not misquoted, his pronouncement contains two misstatements about both the NATO mandate and international humanitarian law.

UN Security Council Resolution 1973, the resolution under which NATO is conducting its military operations in Libya, enables

By its plain language, UNSC Resolution 1973 authorizes member states to use force to protect civilians, not civilian forces as Sarkozy states. “Civilians” and “civilian forces” are two distinct concepts as the following discussion (hopefully) illustrates.

International humanitarian law (IHL), the body of law which regulates armed conflict, obligates belligerents to distinguish between civilians and other belligerents. This is the so-called distinction principle housed within the civilian immunity norm. Once belligerents make this distinction, IHL prohibits them from deliberately targeting civilians. To do so is a war crime.

However, it’s not as simple as that. Not all civilians are protected from deliberate attack under IHL. And this is where Sarkozy commits his second misstep. According to the 1977 Additional Protocol I to the Geneva Conventions civilians lose the protections of the civilian immunity norm when “they take a direct part in hostilities.” When civilians directly participate in hostilities, they can be targeted. Deliberately targeting such civilians is not a war crime.

So, when is a civilian considered to be directly participating in hostilities? Well, this is a dissertation-worthy question, too complex to be tackled within the confines of a blog post. Suffice it to say that the ICRC offers its explanation for what this phrase means in its Interpretive Guidance for Direct Participation in Hostilities under International Humanitarian Law. Based on this document and past practices, civilians engaging in armed resistance, like those in “civilian forces”, would likely lose their protections under IHL. They would not be the civilians for which UNSC 1973 enables the use of force to protect.

Sarkozy isn’t the only one who’s misstated IHL. That the lack of clarity is so widespread on this issue of when civilians can or cannot be targeted during armed conflict is precisely the reason why the ICRC had to issue its Interpretive Guidance. It will be interesting to see whether (and if so, how) this confusion may manifest in the ICC’s investigations into possible war crimes in Libya.

What Exactly is the Point of Foreign Policy Analysts?: Lessons from Libya (and any other crisis in history)

Quote of the Day