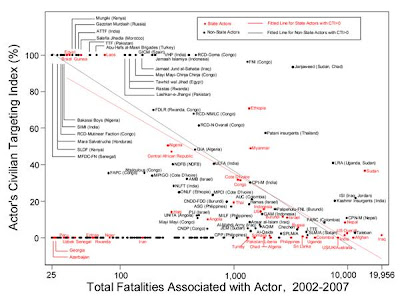 In a new paper, Michael Spagat and a number of collaborators explore the determinants of intentional civilian killing in war.

“First, the majority (61%) of all formally organized actors in armed conflict during 2002-2007 refrained from killing civilians in deliberate, direct targeting.

Second, actors were more likely to have carried out some degree of civilian targeted, as opposed to none, if they participated in armed conflict for three or more years rather than for one year.

Third, among actors that targeted civilians, those that engaged in greater scales of armed conflict concentrated less of their lethal behavior into civilian targeting ad more into involvement with battle fatalities.

Fourth, an actor’s likelihood and degree of targeting civilians was unaffected by whether it was a state or a non-state group.”

Now those who follow the literature on war law compliance will find a number of these arguments to be quite interesting, somewhat counter-intuitive, and highly policy-relevant. I’ll leave that discussion to comments (may even kick it off) but in the body of this post let me just say two things.

First, this paper is path-breaking not just for its findings but for the data it relies on. The authors are working with a new data-set based on combining three existing Uppsala data-sets: One-Sided Violence, Battle-Related Deaths and Non-State Conflict. Their aim is to disaggregated “intentional targeting of civilians” from wider civilian battle deaths, thus distinguishing for the first time I know of in a large-N study between civilian deaths caused on purpose and those caused incidentally from lawful operations. This is a fundamental distinction in international law that until now has until now been poorly reflected in the datasets on civilian deaths, making it difficult to track war law compliance, as I’ve argued here and here. Parsing existing data this way is a huge step forward for those of us trying to understand the effectiveness of the civilian immunity norm.

But that said I do see a limitation with the data coding. It seems the “battle-related civilian deaths” category ends up including both “collateral” deaths (which are legitimate under international law) and “indiscriminate deaths” which are not (see p. 12) and on the legal rule see AP 1 Article 51(4). So the “intentional targeting” category which is based on the one-sided-violence data, reflects only one type of war law violation rendering the data as currently coded only partially useful for tracking compliance with the Geneva conventions. A more versatile dataset would code each of these categories separately, so that scholars designing their research in different ways could choose to sum or disaggregate them in different combinations. Conflating indiscriminate attacks with collateral damage is both conceptually problematic and, I fear, risks leading to misunderstandings about the status of indiscriminate attacks in international law. I hope that continued work will be done on this dataset to correct for this problem as it will make the data far more useful to replicating and testing these and other hypotheses on civilian victimization.

Post-revolution Walk of Shame in Libya: women asked to ‘go home’ in the afterglow of the revolution