Stuff Political Scientists Like #10 — a Degree from an Elite School 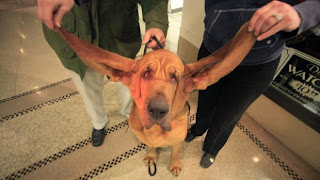 Political scientists like other political scientists with a Ph.D. degree from a good school. Those who go to Harvard or Yale or Berkeley are ‘well-trained.’ This means that they have successfully completed coursework in rigorous quantitative methods, not that they don’t pee on the floor. Schools with a good pedigree degree offer no guarantees on the latter. In fact, continence is unlikely.

Different kennels elite departments are known for their skill in preparing graduates of particular breeds kinds. Midwestern schools tend to produce terriers students excellent at getting close to the ground to inductively derive theories based through extensive quantitative data mining. European schools are fine producers of hounds post-structuralists capable of sniffing out even the deepest reifications. Chicago has a reputation for training both Rottweilers offensive realists and German sheperds defensive realists. The University of California, San Diego excels at producing herding dogs rationalist scholars who round up the appropriate cases so as to avoid selection effects, while Rochester is an excellent school for sporting dogs game theorists.

Every year students of various pedigree and breed compete for best in show a tenure-track academic job. They are judged on the basis of their gait job talk, teeth collegiality, and, to please the diversity office, color. Pure-bred elite students with papers a diploma from a top school are almost guaranteed a good job. Those mutts who adopt a more analytically eclectic approach find that they please no one, and often spend several months if not years in a humane society visiting adjunct position before they find a nice home with colleagues who love them. They are generally no longer puppies much older than the average student with a good degree when they begin their first job. For unknown reasons, however, they do have fewer health problems and generally live a longer life. Nevertheless, often they are never adopted, in which case they generally are euthanized forced to go to law school. Faculty members generally prefer a student with a good degree, but they often feel better in the end giving someone else a shot.

Of course, having a good degree has a major downside too, however. Generations of inbreeding at elite schools of political science can lead to congenital problems such as an exceedingly narrow dissertation topic involving something called a “selectorate” and, somewhat inexplicably, hip problems. They are snooty and have bad dispositions. In rare cases, this can be blamed on rabies, but this has mostly been eradicated.

If the particular candidate selected for a permanent position turns out to not in fact be well trained and bites people does not perform adequately, it is possible but not to easy to get rid of him (or her). He likely has children friends and allies who do not want to part with him. The department might, nevertheless, find a nice place for him in the country deny him tenure.