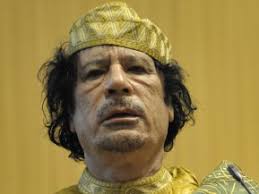 I’ve been in the throes of finishing a book and other matters so I haven’t had a chance to blog much lately.

A couple of quick observations on the death of Qaddafi (assuming the reports are confirmed). First, he died with almost all of the country opposed to his rule and celebrating his death. Second, he was killed and his forces were defeated by indigenous forces with the support of NATO. While we have seen a good deal of criticism of NATO, US Libya policy, and of R2P (as a neo-imperialist enterprise) in the past several months, that criticism has tended to dismiss or diminish the fact that the effort to overthrow Qaddafi was fought by a broad coalition of Libyans with widespread Libyan public support –not just a handful of NATO states.

So let’s be clear, we would not be witnessing a celebration in Tripoli, Benghazi, Misratah and elsewhere today without the combined efforts of the Libyans themselves and the international community — motivated by the concept of R2P and the norms embedded in it. Qaddafi clearly had lost domestic as well as international legitimacy. As his forces converged on Benghazi in March a global coalition concluded that a mass atrocity event was imminent. That coalition included the Arab League, leading human rights and humanitarian organizations, as well as much of the rest of the world, and they backed the United Nations Security Council Resolution 1973. That coalition demanded and endorsed a robust NATO-led intervention to protect civilians and their collective efforts empowered local forces to resist and ultimately to prevail.

It is true that NATO angered many by moving beyond the mandate of UNSC Res 1973 and declaring regime change as one of its key objectives in the pursuit of protecting civilians. But, regime change was not only the objective of NATO, it was also the objective of what appears to be an overwhelming majority of Libyans. Many of whom believed that if Qaddafi had been able to stay in (or later return to) power he would have slaughtered his opponents, including those civilians sympathetic to the revolution.

Critics of the Libyan intervention == or any intervention tend to dismissively proclaim that its important to “Let the Libyans decide it for themselves.” That’s a cop out. What exactly does that mean? In the absence of NATO’s air campaign we would not be witnessing the celebrations today. The Libyans wanted to, but probably could not have, settled it by themselves.

Joshua Goldstein and I have a piece on humanitarian intervention that will be out in the next issue of Foreign Affairs — due out in the next day or two — in which we argue that there is a broader aspect to Libya and to humanitarian intervention. Intervention along with R2P, peacekeeping, and a broad range of civilian protection mechanisms and norms have contributed to a dramatic decline of violence around the globe. Joshua presents this more explicitly in his new book, Winning the War on War and Steve Pinker pads that discussion in his excellent book. In short, there is a reason global violence is down — and the ideas and norms embedded in R2P, peacekeeping, and transitional justice are working.

For what its worth, R2P at its core is a concept that articulates a redefinition of sovereignty. It entails responsibility as well as rights. When a leader commits crimes against humanity, war crimes, ethnic cleansing, or genocide, the rights and protections of sovereignty are lost.

This is a revolutionary idea. It is also remarkably young. Most of us who teach IR Theory begin with Realism and teach Thucydides and the Melian Dialogue. Realists like to use Thucydides to emphasize the enduring dimensions of Realist logic across a range of international orders and 2,500 years of history. I use it to demonstrate the remarkable youth of civilian protection mechanisms in global society.

I’m not so pollyanish to believe that the death of Qaddafi will lead to full compliance with R2P or that R2P will be able to end genocide or all atrocities. But it will and has stopped many. Critics point out that we still see Assad and Bashir acting today with impunity. Yes, but most of the world recognizes that their conduct is abhorrent. And, we no longer see Charles Taylor, Milosevic, Karadzic, Mladic, or Arkan. And after today, we no longer see Qaddafi. This has all happened in a remarkably short period of time. History may not have turned, but it may well be changing.

Rumors of His Death Have Not Been Exaggerated