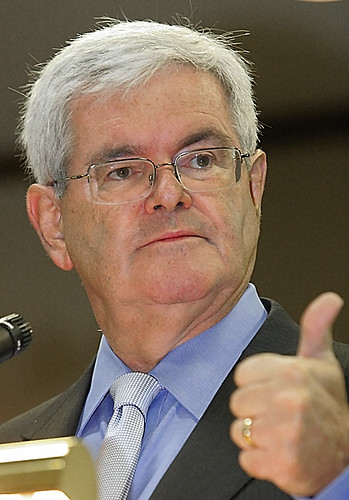 Born Newton Leroy McPherson, the man now simply known as “Newt Gingrich” has been surging in the latest opinion polls asking Republican voters to identify their preferred presidential candidate. He also recently won the endorsement of the Manchester Union Leader, which 538’s Nate Silver finds to be important in the early New Hampshire primary:

This analysis finds that The Union Leader’s endorsement has been highly statistically significant in helping to explain the voting results. Consistent with the simpler averaging method that we used before, it pegs the endorsement as having roughly an 11-percentage-point impact.

Academic readers of this blog may well know that Gingrich, as one scholar described him, is “a card-carrying member of the overeducated elite….Gingrich holds the degree of Doctor of Philosophy in Modern European History from Tulane University in New Orleans.” He had a tenure-track job at West Georgia College in the 1970s, though he was denied tenure and took up politics full-time.

Today, someone put Gingrich’s dissertation on the internet. Feel free to bookmark and read later the former House Speaker’s lengthy take on “Belgian Education Policy in the Congo, 1945-1960.” Since I don’t have time in the near-term to read this tome myself, I’m dependent upon the prior work of Laura Seay, a young scholar now at Morehouse College, who actually reviewed this work in 2009:

I finally sucked it up and headed to the basement microfilm room in the library to read Gingrich’s dissertation. (When I say “read” here, I mean, of course, that I skimmed through until I found something interesting.)

Seay reports quite a bit of detail about Gingrich’s dissertation on her blog post. I won’t spoil too much of her review (read it yourself), but the take home point is relatively important:

The whole thing is kind of a glorified white man’s burden take on colonial policy that was almost certainly out of vogue in the early 1970’s.

I mention this point because I’m reminded of something ridiculous candidate Gingrich said about Barack Obama in September 2010 to National Review Online:

“What if [Obama] is so outside our comprehension, that only if you understand Kenyan, anticolonial behavior, can you begin to piece together [his actions]? That is the most accurate, predictive model for his behavior.”

Now that we know about Gingrich’s early work as an historian, I ask the following questions:

What if Gingrich is so outside our comprehension, that only if you understand Belgian, pro-colonial behavior, can you begin to piece together [his actions]? What if that is the most accurate, predictive model for his behavior?

For related discussion, see this on Libya, this on Iran, and this on the latest in Afghanistan and Pakistan, etc.

Cutting Through the Chaff on US Declne