Isn’t there a global climate conference in Durban?

Why aren’t you there? You love South Africa. New baby. ‘Nuff said.

What, there is more? Low expectations. Hard to justify traveling all that way (let alone burn all those hydrocarbons) for a meeting that is likely to be unproductive.*

I take it you are not a big fan of big global conferences? Not really. Hard to see how thousands of delegates and NGOs can converge in a single place and actually produce meaningful results.

Jealous much? A little.

Ok, low expectations aside, what would constitute a “success” and what would be a failure?

Here are some headlines coming out of Durban that would signal “success.” 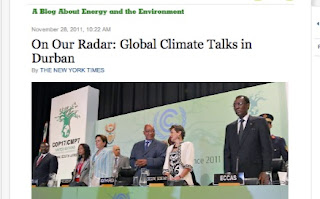 Here are some headlines that would be bad news for future action on climate change.
Somewhat humorous, but what does this all mean?
Ever since the United States Congress failed to act on domestic climate legislation in 2010, it has become clear that the Obama Administration is not in a strong position to do much at home to address its greenhouse gas emissions or provide its fair share of funding for global climate finance. This has cast something of a pall over the ambitions that can be achieved globally because at the heart of the agreements reached at Copenhagen in 2009 and Cancun in 2010 are non-binding political pledges by countries, including emerging economies like China, to take action at home. With the U.S. hard-pressed to do much, this could take the steam out of other countries’ efforts. That said, there has been some good news as Australia recently passed a carbon tax, and China has actually embraced more robust action.
Advanced industrialized countries, what we used to call “rich” countries, also pledged billions in climate finance to developing countries, up to $30 billion in the short-run. They are expected to mobilize $100 billion per year in public and private sources by 2020. Unfortunately, without a price on carbon in the United States, it’s hard to see where money from the U.S. will come from. With Europe on the brink of financial catastrophe, it’s also increasingly unclear whether Europe will be in a position to keep its commitments.
Moreover, though the global recession has helped U.S. and European emissions decline, global emissions are soaring. Meanwhile, the politics in the U.S. are unfavorable for another legislative effort. The Obama Administration is nominally committed to its commitments to reduce emissions 17% below 2005 levels by 2020 but unless it unrolls a regulatory approach to carbon and President Obama wins in 2012, it’s hard to see how those all come to pass (though its actions on automobile fuel efficiency, appliances and other measures have all been quite positive).
So that’s old news, what’s happening in Durban?
In the midst of all this comes Durban where there is plenty of unfinished business. Copenhagen and Cancun created the Green Climate Fund but left the details on its structure, who administers, who receives, and what it will fund for subsequent negotiation (details were discussed by a 40 person Transitional Committee). Assuming some of that climate finance materializes and is directed multilaterally through the Fund, there have to be some clearer rules on how it will operate. Incremental plodding progress on this issue would make for a low-key but successful meeting.
The danger is a big dust-up over the future of the Kyoto Protocol. Its first commitment period ends in 2012 and Europe, China, and developing countries would like to see it extended for different reasons and with slightly different implications. Developing countries want to see a second commitment period of binding emissions reductions for developed countries (Ed. – ain’t gonna happen). Europe might accept a political commitment of a second commitment period but wants countries to set 2015 as the date for a new legally binding treaty that would take effect in 2020 so long as countries like China and India sign up (Ed. – ain’t gonna happen), but it may settle for Kyoto’s first commitment period to be extended for a few years.
China likes Kyoto, not least because it enshrines legal asymmetry for developing countries, binding emissions for advanced industrialized countries but none for itself. China also likes Kyoto because it has been the main beneficiary of the Clean Development Mechanism, which allows rich countries to meet their obligations at lower cost by paying for projects in developing countries.
For their part, countries like the U.S., Canada, and Japan have ruled out a second commitment period under Kyoto. As U.S. negotiator Jonathan Pershing said: “A structure of a legal agreement where we are bound and major emerging economies are not is untenable.” All three of these countries have had difficulty meeting their Kyoto Commitments and support the new processes created under Copenhagen and Cancun. Rather than a divisive fight over new binding commitments or a new treaty, these countries want to spend the time at Durban fleshing out the rules and procedures related to transparency, technology transfer, and finance agreed to last year in Mexico.
As Robert Stavins from Harvard noted, there are actually three negotiation tracks on-going: (1) a Kyoto track, (2) a track based on Long-Term Cooperative Action (LCA) emanating from the first 1992 framework treaty, and a third Copenhagen/Cancun track. The U.S. and company want to combine (2) and (3) and focus on the technical details of those (for discussions on these dynamics, see here and here in Bloomberg. Read CFR Michael Levi’s blog and FT column for a more extended discussion here. NRDC’s Jake Schmidt has a three part series on Switchboard here).

If it wasn’t clear, I’m sympathetic to the U.S. point of view. I don’t see belabored negotiations about treaties that aren’t going to happen to be at all useful.

So, how is it all going to end?
Your guess is as good as mine. My most hopeful faux headline from above is the one from The Onion or maybe the first one on the Green Climate Fund. If there is drama at this meeting, that would likely be bad. I don’t see how the U.S. can be shamed into action internationally without a domestic consensus at home. That brings us back to domestic politics and the need for smarter climate strategies here at home, getting angry, going right, or something altogether different.
* Actually, members of our research team from the Climate Change and African Political Stability Program are presenting our work at some side events.

The Politics of Ressentiment, Round XXIV (Updated)