Keeping Up With The International Criminal Court: The Realization of Judicial Intervention 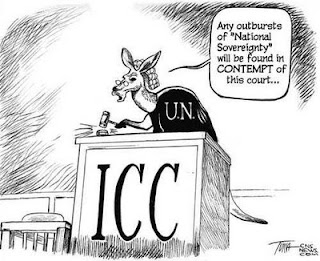 The International Criminal Court would “wither and die” was once the prediction of John Bolton, former US Ambassador to the UN. It seems that is not the case. There has been a dizzying amount of activity surrounding the Court lately, much of which underscores that judicial intervention is becoming a mainstay of conflict resolution and peacebuilding.

Undoubtedly, the ICC will be the hot topic at your department’s holiday party ;) Here’s your cheat sheet so you can nerd out with everyone else. If you get stuck, just wryly remark that it depends on sovereignty, or complementarity, or selectivity. That’s always gold in international justice.

LIBYA: Saif al-Islam Gaddafi (and maybe al-Senussi?) was captured and the jockeying for who gets to conduct his trial began. Ocampo suggested on his recent visit to Tripoli that the Libyan court system might be capable of conducting a fair trial and that the ICC would provide assistance, not competition. But it’s not up to Ocampo. ICC judges will determine whether the Libyan court system is up to snuff. If a Libyan court does try Saif  this is an opportunity for the ICC to affect positive complementarity and help rebuild the rule of law in Libya. But there are valid concerns that Libya courts are not ready so soon into the post-authoritarian transition and after decades in which the courts were an instrument of repression. Louise Arbour, head of the International Crisis Group and former prosecutors at the ICTY and ICTR, explains the tensions of complementarity in this case and why international justice is often a measure of last resort.

SYRIA: The UN Human Rights Council has found that crimes against humanity, including murder, torture, and disappearances, have been perpetrated by Syrian security and military forces and that the death toll is at least 4,000. UNHCR chief, Navi Pillay, is urging the Security Council to refer the situation to the ICC. But the UNHCR’s December 2nd resolution condemning the violence did not explicitly ask for such a referral. Certainly a UNSC referral is warranted and would counter criticisms that judicial interventions are politicized and selective. But China and Russia would veto it so that’s a non-starter.

MEXICO: Human rights activists have petitioned the ICC to investigate and determine whether crimes against humanity have been committed in the context of the state’s “war on drugs.” Specifically, the petition alleges that President Calderon, a top drug cartel boss, and political and security officials are responsible for the murder, torture, and kidnapping of hundreds of civilians in a war that has killed 45,000. It will take a while before the ICC prosecutors can determine if the case meets the “sufficient gravity” criteria and if the crimes were “systemic” and “systemic” to warrant charges of crimes against humanity. Mexico is a State Party to the Rome Statute but the government immediately rejected the accusations and insists that the rule of law is respected and upheld in Mexico. Calderon has called the accusations “slander” and the government issued a statement saying “it categorically rejects that security policy could be considered an international crime.”

KENYA: A Kenyan high court judge issued an arrest warrant for President Bashir of Sudan. The Kenyan chapter of the International Commission of Jurists (and NGO) filed the request. Bashir has visited several States Parties to the Rome Statute, including Kenya in August, and was not arrested – a violation of States Parties’ obligations. The recent ruling prompted the Sudanese government to expel the Kenyan Ambassador and prompted criticisms that this was a political move by the ICJ to put pressure on the Kenyan government to cooperate with the “Ocampo Six” cases before the ICC. This is partially a score for Rome Statute compliance, but the Kenyan government plans to appeal the ruling. One very interesting aspect of the ICC-Kenya situation is the prominence of civil society actors pushing for accountability, and the growing rift with political elites.

COTE D’IVOIRE: The ICC unsealed an arrest warrant for former President Laurent Gbagbo on November 29th and he was promptly transferred from his house arrest to The Hague. This is the first head of state to appear before the Court as Gaddafi met a different kind of “justice” and Bashir is still enjoying his impunity. Gbagbo is accused of being an indirect co-perpetrator of crimes against humanity, committed in the context of Cote d’Ivoire’s post-election violence from December 2010-April 2011. Rival and current President Alassane Ouattara has long welcomed the ICC’s involvement and wants Gbagbo tried internationally. But the arrest still seemed sudden and dramatic – shocking Gbagbo’s supporters who were hoping for an amnesty-for-peace type deal. Gbagbo made his first appearance before the ICC judges today (Dec 5) and judges will announce on June 18, 2012 if the case will proceed to trial.

There are two things to watch for. First, the timing of the arrest appears political as Cote d’Ivoire has parliamentary elections coming up on December 11th and Gbagbo supporters have pledged to boycott the vote. Second, the arrest is stirring up accusations of victor’s justice. The ICC indicates that investigations are ongoing, that there will be more charges, and both sides are being investigated. But locally there’s pessimism that crimes committed on behalf or at the best of Ouattara’s forces will be prosecuted. 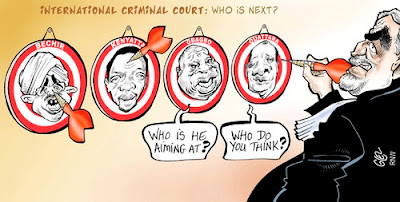 SUDAN: An arrest warrant was requested of ICC judges by the Chief Prosecutor on December 2nd for Sudan’s Defence Minister, Abdelrahim Mohamed Hussein, for war crimes and crimes against humanity committed in Darfur. At the time of the alleged crimes (August 2033-March 2003) Hussein was Interior Minister and representative in Darfur. Hussein is closely connected to two of the ICC’s other targets – Bashir and Harun. The request for an arrest warrant comes at a time when the crimes and victims in Darfur have fallen off the world’s radar and for a situation in which the Court has made the least progress.

And in a bizarre revelation, Time magazine reports that the ICC’s evidence against Hussein is partly derived from data from the Satellite Sentinal Project – the brain child of the celeb badvocacy efforts of George Clooney and John Prendergast of the Enough Project. See this NPR article for why the satellite project, Clooney, and Prendergast, are a little ridiculous. 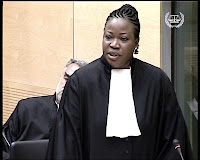 CHIEF PROSECUTOR: Ocampo’s term is almost up (we’ll all miss the eyebrows and swagger) and, to no one’s surprise and much acclaim, Fatou Bensouda will be chosen as the new Chief Prosecutor of the ICC. (To be confirmed at the next meeting of the Assembly of States Parties on December 12th). Currently the Deputy Prosecutor, Bensouda comes from the Gambia and worked at the ICTR. It’s hoped that her leadership will mend ties between the Court and African political elites and the African Union. There’s also the expectation that the Court and its prosecutorial strategy will be more victim-focused.

And lastly, in the best possible example of make-believe international justice, a Malaysian tribunal “reached a unanimous verdict that found George W. Bush and Tony Blair guilty of crimes against peace, crimes against humanity, and genocide, as a result of their roles in the Iraq War.” The verdict obviously doesn’t have much effect beyond shame and blame, but the tribunal will communicate its findings to the ICC and give a little wink/nudge to states to exercise their universal jurisdiction muscles.

My Payroll Tax Rant of the Day