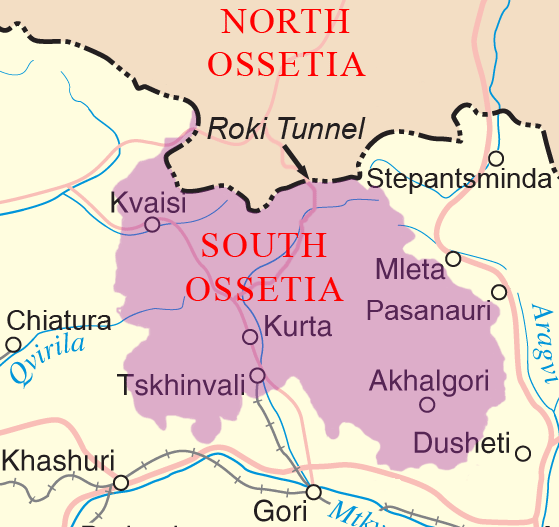 Tensions are rising in the breakaway Georgian region of South Ossetia following a clumsy attempt by de facto President Eduard Kokoity to thwart Moscow’s attempt to install its preferred candidate to succeed him and simultaneously prolong his term in office by having the republic’s Supreme Court annul the outcome of the November 27 presidential election runoff.

But the apparent winner of that runoff vote, opposition candidate Alla Dzhioyeva, refuses to accept the Supreme Court ruling. She has set about forming a government, and met earlier on November 30 with Kokoity to try to persuade him to acknowledge her as president and cede power. When he refused, she released an appeal to Russian President Dmitry Medvedev to intervene to restore “constitutional order and stability.”

Incomplete results made public the morning after the runoff from 74 of the total 85 polling stations gave Dzhioyeva 56.74 percent of the vote compared with 40 percent for Bibilov. Bibilov responded by publicly alleging that Dzhioyeva’s supporters engaged in intimidating and bribing voters to cast their ballots for her.

Acting on those allegations, the Unity party that backed Bibilov’s candidacy appealed to the Supreme Court to annul the outcome of the vote, which it duly did.

The Supreme Court also ruled that because the final election results were invalid, they should not be made public, and that in light of the purported “violations” by her supporters Dzhioyeva is not eligible to participate in the repeat ballot. It did not specify which article of the election law that latter ruling was based on. Meeting in emergency session later on November 29, the South Ossetian parliament, in which only four pro-Kokoity parties are represented, scheduled that vote for March 25, 2012.

The crisis has only deepened:

Alla Dzhioyeva, the disqualified South Ossetian presidential candidate, says she does not see any reason to hold talks with a Kremlin representative who arrived in the breakaway Georgian province on December 2.

Dzhioyeva said she saw no point in meeting Sergei Vinokurov, a representative of Russia’s presidential administration, accusing Russian officials of siding with her political opponents….

Dzhioyeva said her supporters would “disrupt” that March poll if she is not allowed to participate.

On December 2, Dzhioyeva said her supporters would not cast ballots in Russian parliamentary elections on December 4 in protest.

These events lend some support to Cooley’s and Mitchell’s recommendations for how western powers should deal with Abkhazia and South Ossetia (PDF). Rather than simply ignoring them, the west should engage “without recognition” in order to reduce their dependence on Russia. Not that I’m convinced that Moscow would allow relations to develop that far. But it is better than nothing.