The Cultural is Political 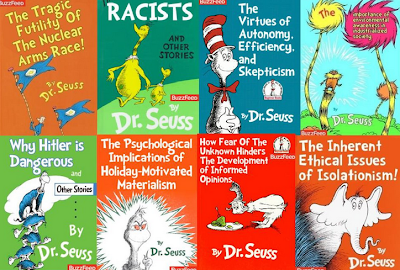 Recently, Mike Innes tweeted playfully that he feared the Duck had become a “creative writing” blog due to the proliferation of satirical posts about pop cultural topics. This tweet was in response to my refutation of Brian Rathbun’s (also satirical) assertion that nerd / metal-head subcultures in US society are mutually exclusive, a post which also included critiques of the genre-specificity of pop cultural research in IR, commentary on a recent documentary about heavy metal music (itself quite political) and a satirized commentary about the strictures of institutional rules and norms on the identities and research agendas of political science professors.

Mike’s implication (confirmed in a second tweet) appeared to be that blogging about pop culture, or blogging as pop culture (that is as satire rather than as serious analysis) is not “real” political blogging. However much he may have been teasing, this got me thinking about what we mean as political scientists when we think or write or teach about popular culture as opposed to policy processes, and especially when we produce ‘creative’ products ourselves as political scientists versus what we consider ‘scholarly’ political science outputs. (Because apparently a blog post is ‘scholarly’ if it reflects a certain style of writing or addresses certain themes but is ‘creative’ if it deals with other themes or with similar themes using satire rather than social science jargon.)

In this post, and later this Spring at the International Studies Association Conference, I will argue that culture is politics; and that analyses that blend attention to culture with concern over conventional political and policy issues are particularly appropriate on blogs precisely because they are relatively neglected in the discipline (though, this is changing). However, in thinking through this claim, and in watching the comments thread on Megan’s fantastic gender-violence-fetishism post, I realize that one can mean very different things by “culture is politics.” Taking cultural products seriously, examining the politics by which culture is produced, and creating cultural products ourselves are three different roles political scientists can play as bloggers.

For example, taking culture seriously as a carrier of political values and norms is supremely important to what we do, and has been at least since the “cultural turn” in IR in the late 1980s. Of course by “culture” IR scholars used to mean things like nationalist narratives, religion, or gender norms. Feminist IR scholars have long shown how the stories societies tell themselves and representations they create not only about war and peace but also about more mundane things like sex and soup shape not only society but also foreign policy. And it wasn’t long before the lens was turned toward pop culture as well by the work of Juttes Weldes and others: literature carries these narratives, cartoons and comics do, but so too does TV, film, and music.

(The intersectionalities of creative writing, political action and policy processes these have a politics and a history, often forgotten. Take Dr. Seuss for example: we remember him for his children’s books, which have helped carry American values both throughout our culture and globally, but he got his start drawing political cartoons: World War II in some respects created him as a writer and artist.)

Today, classes on “Film and Politics” are proliferating in political science departments, and with good reason: political scientists are rightly interested not only in how cultural products like films and cartoons represent politics, but also in the causal and constitutive impact of those representations on actual political processes. While there has been less research (that I’m aware of) by political scientists into musical genres and politics, this only suggests a new niche for aspiring political scientists that needs to be filled – like other cultural niches whose political implications have been insufficiently explored, like fashion (but see Cynthia Enloe‘s work on militarism) or food (but see Ansell and Vogel’s work on beef) or sports (but see Tomlinson and Young on national identity and international sports events.)

A second strand of “pop-cultural” analysis here at the Duck (and in the discipline, as a few of the cites above suggest) concerns the politics of cultural industries – rather than analyzing representations in cultural products (like Harry Potter or Game of Thrones) we sometimes analyze, for example, representations in culture-industrial sites (like the Grammys or the Browncoats movement) or we sometimes look at the intersection of the two: how culture-industrial actors sometimes function intentionally as political actors through celebrity diplomacy of different types. In the field of IR, there is more and more literature across methodological divides that deals with these topics – from John Street’s conceptual treatment of ‘celebrity politicians’ to Huliaris and Tzifakis’s case studies on celebrity activism to James Fowler’s elaborate empirical analysis of the Colbert Bump.

But finally there is the manner in which, especially on Fridays, bloggers at the Duck post more light-hearted or creative cultural products of our own loosely related to the topics we study – our version of casual Fridays which manifest at other blogs as pictures of cats, children or squid. Here at the Duck you won’t find squid, but you may find polar bears. Sometimes this is truly “casual” blogging and sometimes we put significant creative effort into playfully blending cultural critique, political analysis and satire. It’s true that it’s sometimes hard to tell where political science leaves off and tomfoolery begins. But then, isn’t the very definition of ‘tom-foolery’ socio-politically constructed? Yes.

Though I don’t often give it much thought, if asked to think about it I guess I’d tend to be a fairly loose constructionist myself on which of these roles most befits political science bloggers any day of the week, but I suppose there is room for disagreement there. What do readers think?

Challenges to Qualitative Research in the Age Of Big Data