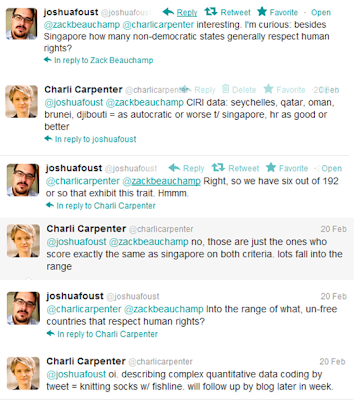 But some things can’t be boiled down to a tweet, as I discovered this week when attempting to explain Cingranelli-Richards data coding in response to Joshua Foust’s queries on my abusers’ peace post.

What I didn’t think to tell him in response to his original question was: here is how you can look it up for yourself.

So this post contains (I hope) a better answer to Josh’s question but also a brief primer on the CIRI dataset, what it contains and how to use it.

I should add that I’ve never used it for research myself, that I don’t work with large data-sets, and that I’m not claiming to think the coding is perfect. But if you ever need to look up the answer to a question like: “what are the states that are similar to Singapore in both regime type and human rights record?” CIRI provides a user-friendly resource for a little fact-checking.

Here’s what the data-set contains: CIRI consists of quantitative scores for government respect for 15 internationally recognized human rights for 195 countries, annually from 1981-2010. The rights coded include: physical integrity rights (like no torture, disappearance or summary execution), empowerment rights (free speech, free assembly, freedom of religion, and the right to vote) and indicators for women’s and workers’ rights (here are the descriptions). Scores on each for each country-year were derived by coders drawing on Amnesty and State Department country reports for that year (codebook here).

CIRI is primarily designed to be used by students of human rights for large-N regression analysis, but here’s how journalists, bloggers, or can use CIRI to answer basic questions about countries’ human rights records at a glance : 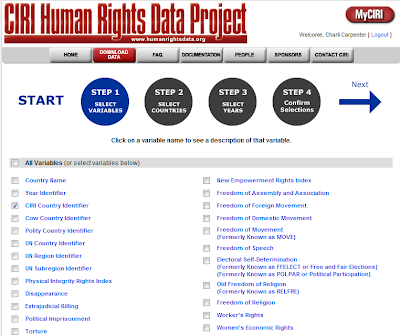 3) Select just the variables and years you want.

4) Compare them in an excel sheet.

5) Sort the Excel sheet columns according to the question you’re asking.

Here’s how I used it to answer Joshua’s question on countries like Singapore (and a better explanation of my answer): I created a personal spreadsheet for just the year 2010. As a measure of “human rights performance” I looked at just the physical integrity index already created by CIRI (which combines scores on torture, extrajudicial killing, political imprisonment and disappearances). The index ranges from 0 (no government respect for these four rights) to 8 (full government respect for these four rights).

For “freedom” I created my own index by also downloading the columns for freedom of association, freedom of speech, electoral rights, and independence of the judiciary. These are coded from 0-2, with 0 being the worst score.* So my CIRI dataset included the CIRI variables labeled PHYSINT, INJUD, ELECSD, ASSN, and SPEECH. I used Excel to create a column averaging these last four columns numbers for each country, and then compared my country average score on “freedom” to the CIRI country score on “political integrity rights.”

How did I do this at a glance without statistical analysis fast enough to respond to a tweet? Easy. I just sorted the PHYSINT column by largest number first, so the best human rights performers are at the top, and the worst are at the bottom. Among those countries who receive an “8” it’s very easy to tell who are the free-est and least free – they vary in rank order on the other column between .25 and 2 (they can go as low as 0 but don’t for these high human rights performers). If you scroll down into the 7s (which is where Singapore sits) you can see the same distribution. 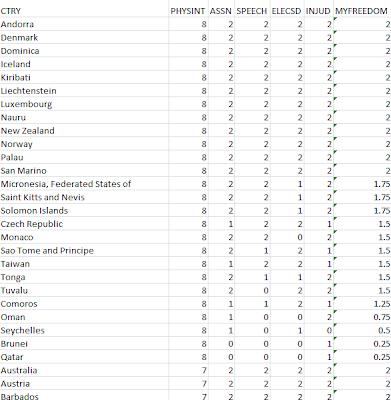 Now, Joshua’s question was which countries were similar to Singapore – relatively free, but relatively poor human rights record – and I listed the countries that score as well or better on human rights (7 or 8) but as bad or worse on freedom (.75, .5, .25, or 0). But his real question is to what extent they are outliers among these high-performers. (The comparison should be the the other high performing countries, not to all 192 countries in the dataset.) And to some extent Josh’s hunch is correct: 67 countries receive the 7 and 8 rankings for human rights, and only 6 score at .75 or worse on freedom (Singapore, Djibouti, Qatar, Bahrain, Seychelles, and Oman). However that doesn’t mean that all the other high performers are at the upper ranking for freedom – lots are in the middle ground. Only 29 out of these 67 have the highest democracy score. So on the one hand if you have the highest human rights score you have a 43% chance of being a full-fledged democracy, and only an 8% of being an autocracy. But you also have a 52% chance of falling somewhere in the middle on the democracy scale.

Within the middle and lower grades on human rights performance, especially the middle performers receiving a grade of 4, 5 or 6, there is wide variation in the relative freedom score. So while even eyeballing this data you can see a relationship between rights and democracy, the correlation is certainly imperfect. States like Singapore and Qatar that score super high on one indicator and super low on the other are indeed outliers, as are states like South Africa with mid-high freedom scores but low human rights performance. What these cases show, though, is that we have to qualify our conflation of human rights and democracy and think more about how this relationship works.

But the key point here is: this data is at anyone’s fingertips who wants to look at it independently or play with it for their own purposes.

*This is NOT the measure of democracy used in the studies I wrote about, both of which use a different dataset, Polity IV, to measure democracy. I used the CIRI measures as a short-cut because a user can easily compare them to one another.