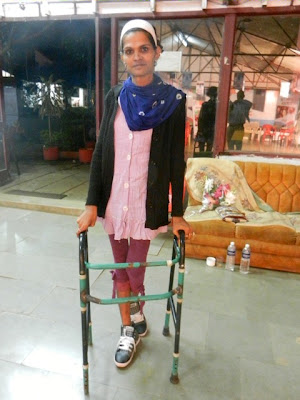 A few days ago I met the woman in the attached photograph. Her name is Karima. She is a college graduate who was born a male and, at 21, had gender reassignment surgery. Some time later she entered the “Miss Transgender India” contest and took fifth place. Her boyfriend, out of jealousy, set her on fire (her neck, torso, and upper arms show terrible scars) and broke her leg so badly that she can no longer stand unassisted.

After that experience, Karima joined a group of “hijra”. In India, hijra are communities of transgendered people who identify as women or who have actually had sex-change surgery. Shunned, or worse, by society, they survive largely by begging, by dancing and giving (or withholding) blessings at weddings, or through sex work. They normally have few other employment options, and can expect little protection from government and the police. Usually groups of hijra are led by “gurus” who exploit the “chelas”, or disciples, under them, taking their earnings and forcing them into sex work.

I met Karima because she was participating in a program, run by a local NGO and sponsored by the UN Development Programme, to teach the transgender community about their civil rights. The training, which took place over two weeks in the city of Raipur in Chhattisgarh state, included talks and exercises on legal remedies, community organizing, right to information issues, and petitioning for government action. It also had psychological social workers talk about building self-esteem, and an effort to build job skills. The NGO is talking to employers about finding jobs for hijras.

Why is the UN sponsoring such programs? The idea of a “human rights based approach to development” began with talk about many economic and social rights – the right to food, shelter, education – but has led UN agencies increasingly towards promoting civil and political rights as well. That means working with marginalized groups such as lower castes and untouchables, indigenous (“tribal”) peoples, and even hijra. It also means promoting social change, and challenging government power. This happens at the highest level – where, for example, UN agencies have quietly pushed back against Indian government opposition to providing aid in areas held by Maoist rebels – and at the local level – where NGO workers on UNDP projects have been roughed up for promoting lower-caste rights. Of course the UN agencies understand their limits, and in the past UN officials have been asked to leave – quietly – for speaking of rights too much. But its no longer a taboo topic.

There’s no upbeat ending to Karima’s story. This tiny project in one state is hardly likely to change very many lives; it’s a pinprick in the vast social fabric of India. True reform will require Indian action, not anything the UN can do. But it points to interesting changes in how human rights are pursued by the UN system. And is indicative of how the very meaning of development has undergone a transformation internationally.
_________________
Joel Oestreich is Associate Professor in the Department of History and Politics at Drexel University and the author of Power and Principle: Human Rights Programming in International Organizations. He is currently traveling in India on a Fulbright Fellowship.

Climate Change and the Axis of Fear