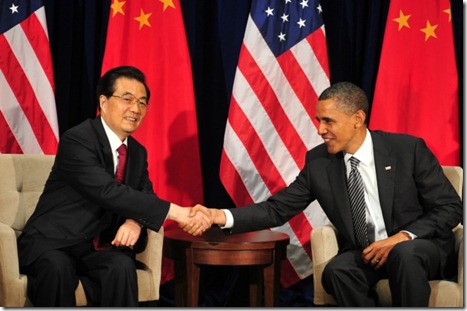 So the US is supposedly going to pivot to Asia and start worrying more about China. This makes sense (which is probably why we won’t do it). The Middle East has become a pretty terrible sinkhole of American power. Increasingly the verdict on the war on terrorism is negative, and we should probably retrench from the Middle East (but we won’t because of the religious right’s interest in the region). Mearsheimer argued that if it weren’t for 9/11 we probably would have focused on China a lot earlier. Kaplan sketched how the US would defeat China in a war. I argued a few years ago, at the height of the ‘China-has-changed-into-a-scary-revisionist’ hype of 2009-11, that containment of China was likely (maybe even desirable

). And clearly China’s behavior over the last few years has raised the likelihood of at least soft containment; even the Vietnamese and the Filipinos are asking for US agreements now.

But I don’t see much Western discussion of how China would/should respond. So in the tradition of those old CIA A team/B team exercises, here are five ideas for how China should/could respond to its incipient encirclement:

1. Pull Korea into its orbit by dumping NK and supporting finlandized unity.

This is such a no-brainer. China’s big regional political problem is that no one really trusts it. So its allies are lame – NK and Myanmar, and even the latter is drifting now. The best way to head off the encirclement that hammered both the Germans and the Soviets in the 20th C is to break the ring with some decent allies, and nasty, dependent dictatorships are not enough. SK is a pretty central link in any containment ring around China, but one where China has a lot of leverage.

Before the 20th C, Korea was Confucian China’s closest ally/subordinate for a millennium. Korean culture is very close to China (even if modern nationalist Koreans don’t want to admit it): the language is shot through with Sinic roots, the philosophy of Confucianism comes from China, social traditions are similar (food, dress, etc.). Koreans will not tell you that China is a big enemy of Korea, no matter how many Japanese and US scholars, pundits, etc. say it is. I see this in class and at conferences all the time. Structural realism and liberalism both say that Japan and Korea should ally against China and NK. Nope! The average Korean just won’t buy that no matter how many times you repeat your IR logic. Instead, he thinks that Japan, and even the US, is a greater threat to Korea than China. Dokdo activates Koreans a lot more than China’s growth.
Also Korea has a long tradition of anti-Americanism too. Yes, they are a good ally to the US, but mostly because they need us a lot more than most US allies, not because they really like us that much. Lots of Koreans that I meet think that the US is heavily responsible for the division of the country, bullies SK leaders, forces unfair trade deals on the country, sends pot-smoking English teacher to prey on their young girls, etc. All this may or may not be true – hold that thought – but consider what an opening this gives China.

Finally, Koreans really want unity, and China is probably best placed to give it to them (more so than the US actually). I have written about this a lot before, but if we accept that NK is all but dependent on China now, then China could basically force a deal in which Korea got unity on southern terms, but only if US Forces in Korea left. Yes, lots of Chinese see NK as a buffer between the robust democracies of Japan, SK, and the US. But NK is a losing horse. Someday it will crash and burn, and how much does it really help China now anyway? Its elites are so unpredictable than the CCP must always be wondering wth they will do this week. A Chinese-backed finlandized unification would electrify the region, neutralize a major link in the ring, isolate Japan, and confuse the US (would the US oppose unity to keep troops in Korea and Japan?).

India and China will never be too close (barring a democratic revolution in China). Their long border and history of tension makes the relationship tough. But China would at least benefit if India did not throw in its lot completely with the US camp in Asia. In 2010, I predicted that India would have US bases within the decade because of the almost tailor-made fit between India and the US. That is, both India and the US share both values (liberal democracy) and security concerns (salafism and China). No other major US ally has that nice contiguity (see the chart below). But a tight Indo-US link would be clearly worsen China’s position, complementing the current tight US-Japan link and providing an obvious anchor on the other side to a ring running from Japan through Korea, Taiwan, the Philippines, Australia, and India. That really would be encirclement along the lines of what happened to Germany before 1914.  But India isn’t really following this script. They’re hedging the US somewhat, and the evolution of the responsibility to protect into triumphalist western regime chagne in Libya looks to New Dehli like neocolonialism all over again. There’s an ‘BRICS solidarity’ opening for China here. Given the India is still pretty soft on American option, a charm offensive, however humbling, would be wise.

Part two will come in 3 days.