Roseanne vs Kim: TV icons and the Republican ‘war on women’ 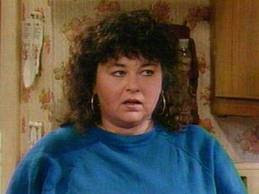 Over the last few weeks it has been hard not to get overwhelmed by all the headlines related to the Republican primaries and women. There has been theRush Limbaugh fiasco, with Rush outdoing his usual dink-guisting self by calling law student Sarah Fluke a slut. This has been followed by outrageous comments from almost all the Republican candidates: Romney just declared that he would get rid of planned parenthood, Newt has had a consistent ‘woman problem‘ (and I don’t mean his two ex-wives), and Santorum has had a string of great one-liners, including the recent declaration that sex should only be within marriage and for pro-creation (hmm that’s what my 10th grade biology teacher told us at Catholic school too, and half my female classmates ended up pregnant). This has been topped off with Fox News commentators adding to the accusations of female birth control users as ‘wanting to be paid to have sex.’

All this chaos surrounding birth control, sex, and women’s rights leads me to ask one question:What would Roseanne Bar do?
Seriously, as each of these women’s issues get’s raised and dragged back to the dark ages by Republican candidates or commentators I can’t help but think of the good old days, when (1) it felt like we’d settled birth control and abortion as a woman’s right (I think it was 1993 when Roseanne had a ‘frank’ discussion with Becky about birth control- the show also dealt with abortion around 1996); (2) when we accepted that families came in all forms and classes (there were divorces, single moms, and Roseanne was one of the first TV shows to feature a lesbian couple, who controversially kissed in an episode); (3) when we stopped talking about ‘family values’ because we started asking ‘whose family?’ and ‘what values?’; and (4) when women actually took risks and did something with their lives in television shows (in the first season Roseanne works at a dead end factory job and through the seasons we watch her struggle to stay employed, often working two part-time jobs).
So what would the 1990s Roseanne think about the procreation, abstinence, use-an-asprin-between-your-knees as birth control moment we are faced in American politics today?
Don’t get me wrong. I don’t look to television as a ‘beacon of morality’. But it might not be a coincidence that the TV ‘women of the moment’ today stand in stark contrast to the working-class shit disturber hero that was Roseanne. In fact, you also don’t have to look far to see the Republican ideal of the virginal, unemployed, simple woman reaffirmed on our TV screens today: House Wives of Atlanta/New York/New Jersey, and the Kardashians anyone?
In these (sur)reality shows women really do seem to have sex for money, they don’t have jobs (do they?), and they certainly aren’t interested in politics.
What do we make of the shift in the representation of women both within political commentary and within our entertainment programs? How can we start to see the Republican war on women as something being waged within the episodes on vaginoplasty and Kim’s wedding preparations? How, in 2012, do the Kardashians of the TV waves allow the space for a reversal of debates (not just about birth control, but also about class, race, and sexuality) that we had more space to talk about in the early 1990s?
And- most importantly- where’s Roseanne when you need her?

It’s Time to De-Russianize the BRICS