All Politics is Local, Korean style

Because I work for a public university, I am a national civil servant. So it was inappropriate for me to comment on my site about the recent Korean parliamentary election. But now that it’s over (here are the results), I thought it would be fun, as a political scientist, to share this video of what downhome street politics looks like in my election district in Korea. Here’s a little anthropological, comparative politics participant observation in the field.

This took place about 2 minutes from our apartment, in the middle of a boisterous Korean streetmarket (the woman next to me was chopping the heads off of fish). The candidate’s name is Jin Bok Lee (the incumbent and a conservative); here’s his campaign truck and part-time campaign dance squad. So if you’re wondering what Richard Fenno’s ‘homestyle’ campaigning looks like in Korea, here you go, goofiness and all. Don’t miss the ajeossi on the left side boogying with the dancers. Awesome! Doubtless, this is what Rousseau and Thomas Jefferson had in mind

In Busan, I live in Dongnae Gu. ‘Dongnae’ is proper name, and ‘Gu’ would roughly translate as ‘precinct,’ but much it’s larger (around 250,000 people I’ve heard). Busan is pretty conservative, a stronghold for the conservative, government Sae Nuri Party (the new, hard-to-translate name of the old Grand National Party). Korean parties change names all the time, and mix and merge so much it’s hard to keep track.

Korea’s voting system for the National Assembly is similar to the German system for the Bundestag. It’s a mix of proportional representation (54 seats) and single-member districts (246). Here’s a quick write-up on the election process. It’s also a very presidentialized semi-presidential system. There is a prime minister, but he’s pretty weak. Turn out on April 11 was 54.3%. The wiki write-up on the results is amazingly thorough just 36 hours after the vote.

Back in the 1990s, I worked for a US representative in the district office. It was campaign season, so inevitably I ‘voluntered’ a lot. I didn’t have to dance in public like these kids, but we did walk in parades, go to church lunches, work the bingo halls, and do all that sort of stuff Fenno talked about in Homestyle. And when Assemblyman Lee spoke, after the dancers, he all but channeled Tip O’Neill’s famous line that ‘all politics is local.’ Here’s him speaking: 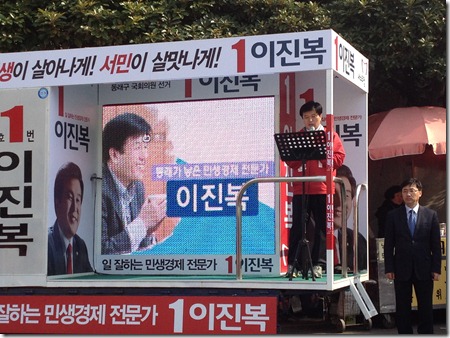 To my mind, perhaps as an IR guy, the big issues in Korea all revolve around North Korea, where I tend to agree with moderate SNP hawks. But as O’Neill and Fenno would predict, our assemblyman said pretty much nothing about foreign affairs. Instead, it was all about the pork. He told us we’d get more money for schools (pretty much a throw-away line in any democracy I guess), more foreign teachers for direct foreign language instruction (a big issue in Korea, where English proficiency is critical professional skill), and Dongnae would become a transportation hub (even though we are a very dense, totally enclosed section of Busan), complete with another subway station (we just got a big new subway interchange built last year, which is supposedly bringing more people to a big mall in our Gu). The big issues in Korea this year are social-welfarist – things like school lunches for kids and the widening Gini-coefficient. So the SNP has been pivoting left for months. This was definitely not Romney talking about ‘self-reliance’ and ‘job creators.’

Finally, I guess as if to show the conservatives around the world just can’t resist, Lee drew some specious link about how the opposition parties in Korea wouldn’t care if al Qaeda showed up in Seoul. Ah, the ease of Bush-Rove-Palin demagoguery. I guess when Obama was “pallin’ around with terrorists,” Korean left-wingers were setting the meets in Seoul. Actually Korea’s conservatives are a lot more balanced and centrist than the GOP, so I was rather disappointed with that remark. Some Korean conservatives have used Christianity as a wedge issue, which has provoked tension with Buddhist community. And NK can always bring out over-the-top anti-communist cold-war rhetoric from the right-wing media here. But the kind of nastiness the Tea Party has brought to American discourse (cheering for the death penalty and such) is pretty uncommon here. I once remember even hearing a sitting congressman on the campaign trail in the US call CNN the ‘Communist News Network’ directly to a group of reporters. To its great credit, the Korean right doesn’t usually talk that way.

It turns out Lee was reelected. The pre-election consensus our Gu seemed to be that he was good, even if even else in the NA is corrupt, which sounds pretty much like the well-established finding in American politics that Americans loathe Congress as a body, but like their own guy.

It is also worth noting that there was almost no one under 40 among the listeners at that street event. That was immediately obvious. That reminded me of those arguments in the US that because the elderly vote and pay attention so much to politics, their preferred issues like Social Security and Medicare are untouchable. Korea is aging rapidly, and I imagine the effects will be similar.

Next, if your wondering about the truck, they are common here, which surprised me. It reminds me of those political trucks driving around in Mr. Smith Goes to Washington, and that’s how they do it. The truck pulls up to an intersection. The dancers and music start up, and then the candidate starts bellowing into the mic. That really struck me, because in the US, when I worked for Congress, it was all about TV. Hitting the streets was a worth a few points in the polls maybe, but it was difficult and boring and time-consuming. (Our candidate hated it.) The real focus was dialing for dollars and then big ad buys on TV. Thankfully, Korea is not like that, at least in the legislative races. Korea is far more dense than the US, so there are only a few major TV markets for a huge number of districts. My colleagues tell me it would therefore be astronomically expensive for National Assembly candidates to go on TV. But this fall is the presidential race, which should be played out heavily on TV in the American sense.

Finally the number “1” on Assemblyman Lee’s truck means his party is the first list on the PR portion of the ballot. List 1 is the conservative bloc; list 2 is the social democratic or liberal bloc (the Democratic United Party).

Random factoid: Door-to-door campaigning is illegal in Korea, in order to prevent direct vote buying. The average constituency in Korea is 200,000 voters, less than one-third of a US House seat. But I still find it hard to imagine that so many people could get bribed.