Kim Jong Un’s Ascent (2): Rocket Launch as a Sign of a Power Struggle? 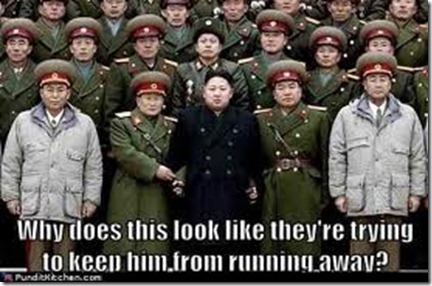 Here is part one, where I argued that Kim’s rise scrambles our conventional wisdom on NK, opening a lot of unexpected room, at least early in his tenure, to try to deal. The cold war stand-off in Korea is now so bad, that there is little to lose in trying to talk with him, and it would seem like a huge missed opportunity to simply blow him off as identically awful to his father. For my regular argument that negotiating with Kim Jong Il was impossible, try here and here (or if you’d rather just read about the ridiculous Homefront video game, try this).
The tentative ‘Leap Day deal,’ from the recent US-NK high level talks, of aid for a nuclear halt, represents just such a possible opening. As predicted, the extreme centralization of NK allowed a dramatic policy U-turn once Kim Jong Il was replaced. The deal is tentative, but it is almost certainly a direct consequence of the change at the very top. It is hard to imagine that Kim Jong Il would have agreed to this; his prestige was too tied to the nuclear program. So if Kim Jong Un is already willing to deal, only ten weeks after his father’s death, this is very promising. It hints at wider possibilities for change. A new leader with such wide policy-making authority, who is not yet heavily tied to the nuclear program, military, or other vested interests, is encouraging. Talks should be pursued, if only because confrontation is always an easy fall-back position. The threatened rocket launch might also be interpreted in this way. Vested interests in NK (probably the military), worried about any opening or change, are pushing back. Rather than reading the contradictory progression from Leap Day deal to rocket launch as typical NK back-and-forth shenanigans justifying the cancellation of the Leap Day deal, it might instead be a sign of the widely-expected post-Kim Jong Il power struggle. If so, then abandoning the Leap Day deal over the rocket launch would set back Kim Jong Un internally against the military. But it is so frustratingly hard to tell.

Hawks will argue that Kim’s room to move is less wide than I suggest. He will clearly face constraints, from the military, and from the regime elite’s expectation that he will keep the kleptocracy rolling. Worse, in the back of the mind of everyone associated with the extreme repression of the DPRK is the fate of Gaddafi, Ceausescu, and the Nazi war criminals. So the new Kim is not likely a Gorbachev, because no one in Pyongyang wants to face an Arab Spring-style uprising, or SK post-unification courts with access to the death penalty. But Kim will also have room to change course, simply because the regime requires his lineage. Many observers expect a radical course change would provoke a coup. And indeed it is likely that Kim Jong Un’s toughest years will be his earliest. There is almost certain to be a power struggle to establish the pecking order of the new regime. But Kim Jong Un will likely be retained regardless. With the collapse of communism, juche and other legitimizing ideologies, the Kim family cult is central to the DPRK as we understand it today. It is almost impossible to imagine a recognizable NK without a Kim monarch, as that is now the effective legitimating ideology of the country.

Hence a military backlash to any changes by the new Kim will be limited by the need of the regime to keep him and his family. While the military might be tempted to ‘evolve’ into a junta like Burma and dispose of the Kims, that would be uniquely risky in this case. The standing alternative of unification with SK requires that NK continually gin up unique and extreme justifications for its separate, poorer existence. The Kim god-cult provides this. It is therefore unlikely the Kims will be replaced, and if Kim survives the coming years as more than a figurehead, he will increasingly set the tone of NK foreign policy as his father did.

Hence engaging with him now is a unique chance to draw him out early, before he is locked into routines by other regime elements. International engagement and success may generate internal legitimacy for him and may vest him in further international successes as a route to greater legitimacy and autonomy when those around him seek to control him for his youth and inexperience. There is much to gain from a major SK-US-Japanese effort to engage the new Kim and little to lose, as the standoff with NK is already in deep freeze.
Clearly negotiations will follow the established pattern of inch-by-inch concession and counter-concession. Kim Jong Il’s unexpected death does not alter the North’s ministerial or bureaucratic players for talks, at least not yet. The regime is still desperately dependent on foreign imports of almost every variety, and Kim Jong Un apparently shares his father’s outsized appetites. The usual gimmicks and twists will certainly apply, but these are now old hat for American and SK negotiators. After twenty years of this, it is extremely unlikely that the democracies will get conned at the renewed Six Party Talks. There is no reason not to try. The new Kim is probably no Gorbachev, but what do we have to lose?

At the one of countless conferences I have attended on the NK question, a colleague once remarked that just about every theory, idea, concept, bargaining tactic, negotiating ploy, gimmick, and other tactic has been thrown at NK over the years to no avail. At this point, we’re so desperate that we’ll try almost anything that has a chance of moderating the regime. This is, however disturbing, correct. As Churchill said, ‘jaw-jaw is better than war-war,’ and NK is so cruel, capricious, indecipherable, and dangerous, that just about anything that offers a chance to temper the regime is worth a try at this point. This does not mean the Six Party democracies should ‘undersell’ concessions to get any deal at all, but it does mean that we should be constantly trying to engage NK, always suggesting ideas, looking for opportunities. Like Europe’s militaries before WWI, the militaries in the peninsula are highly attuned to each other’s moves. The risk of escalation from a spark like Yeonpyeong is pronounced. The democracies should negotiate from a position of strength, but they should return to the Six Party Talks given this extremely unique opportunity.

The constructivism that wasn’t