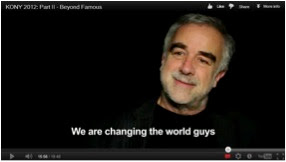 I have an essay online this morning at Opinio Juris as part of a symposium they are running this week on social media and international law:

One of the most curious aspects of the Kony2012 campaign is its backing by an important and powerful public servant, Luis Moreno-Ocampo. In publicly endorsing the campaign, Moreno-Ocampo, the chief prosecutor for the International Criminal Court, has espoused a powerful causal hypothesis: that social media campaigns are an indispensable new tool for the promotion of international justice. In the original Kony2012 video Moreno-Ocampo states: “We’re living in a new world, a Facebook world, in which 750 million people share ideas, not thinking in borders.” In the follow-up video, Beyond Famous, Moreno-Ocampo repeats the message: “We are changing the world, guys. This is completely new.”

Moreno-Ocampo’s enthusiasm for the campaign and for Invisible Children can be understood partly in terms of public relations for his own institution, and for the synonymity of IC’s narrative with the one underlying his own indictment of Joseph Kony for crimes against humanity. But his claims that campaigns like this will decisively shift public attention (and therefore policy attention toward international law and justice and the global institutions that promote them) deserve critical inquiry.

And we need to break this down a bit. Does social media impact citizens’ appreciation of and understanding of international law as Moreno-Ocampo implies? These are two separate questions and two separate processes. Even if they both hold true, does this imply that policy-makers will listen? And if that’s true, then in a world where social media and international law are routinely utilized and invoked by actors on both sides of any political issue, can we assume the net gain for human security will be positive? I don’t know the answers, but it’s worth thinking the questions through a little more carefully.

Some questions I ask:

2) Does “citizen engagement on social issues” (where we see it) necessarily equate to “citizen understanding”?

3) What is the relationship between citizen engagement and citizen understanding, and what engagement/information ratio is most helpful in generating political will for international law enforcement?

4) How much does citizen engagement matter anyway?

5) To the extent that social media empowers the public, and the public empowers policy-makers, can we assume this will result in the promotion of human security and international law?

6) What do we mean by “promoting international law” anyway?

Read my answers here or leave your own in comments on either thread.

Crossing borders in the sciences