What Good is Network Theory in IR? 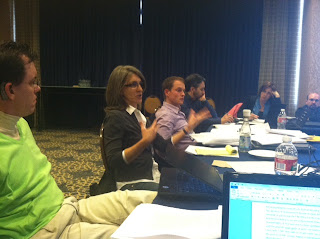 In between ultimate frisbee and lying around in bed sick, I managed to attend a workshop on network theory at the International Studies Asssociation.

I spent some time there thinking about different things scholars mean when they say they are doing network theory, and what is the value added to IR of this basket of approaches.

Here are some tripartite thoughts on the matter, and you can probably guess which approach I’ll be taking in my new book.

1) Network theory provides a way to describe social relations that are neither hierarchies nor markets. This approach is associated with Margaret Keck and Kathryn Sikkink’s work on advocacy networks and continues to hold some sway among “network analytic” scholarship, like Taylor Seyboldt’s recent analysis of the network structure of the humanitarian aid community. I actually don’t buy this approach however. Hierarchies are also networks (Wendy Wong’s great new book uses network theory as a way to describe and analyze variation in the organizational structure of different NGOs, and the same analysis could be applied to firms.) Furthermore, networks can be hierarchical rather than flat. Markets are distinct not in terms of structure but substance.

2) Network theory provides different conceptual tools for measuring (and visualizing) “structure.” IR theorists talk a lot about structure versus agency and yet have tended to have a very thin understanding of what structure is, generally arrived at deductively and treating it as a constant rather than measuring how it may vary by context. Emilie Hafner-Burton, Miles Kahler and Alex Montgomery have a good overview of the kinds of tools we’re talking about, and they distinguish this approach explicitly from the “networks as organization” approach above. The problem with this approach, I think, is that it equates network “theory” with “network analysis tools” and that the use of the tools as a method for measuring or visualizing often doesn’t involve very sophisticated theorizing about what those relationships mean and how they relate to the agency of actors embedded in network structures.

3) Network theory provides a set of propositions about the sources of political outcomes that are relational rather than instrinsic to actors. I like this approach the best because it both limits network theory to something analytically useful (that is, it’s not just another form of organization) and broadens it to include many methodologies besides social network analysis. For example, one could take the theoretical propositions associated with SNA (such as “actors with a high level of betweenness centrality will have the ability to function as brokers”) or “actors with high in-degree centrality within a network will exert greater influence over the categorical meanings within a network” and then examine the extent to which these insights hold true in different network settings by using more qualitative methodologies including comparative case studies, process-tracing, elite interview or focus groups. I think what’s most important is not that we’re able to create colorful maps or measure ties precisely, but that we’re taking relational factors seriously as causal and constitutive forces in world politics.