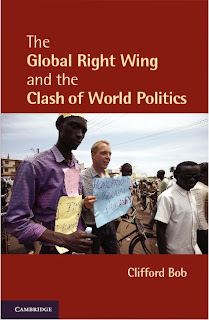 My new book, The Global Right Wing and the Clash of World Politics, has recently been published by Cambridge University Press.  It is available on Kindle for $12.10, Nook for $14.74, and as a paperback for $21.59.   For a free chapter, chapter excerpts, contents, and more please visit my website.

The Global Right Wing shows how these networks come into conflict with left-wing groups, at the UN and in numerous countries worldwide.  The book documents the global battle over gay rights, highlighting formation of the “Baptist-burqa” network spanning conservative believers of multiple faiths.  A chapter examines the network’s clashes with human rights and gay groups at the UN.  Another shows how legal advocacy groups in the network have fought hate speech laws in Sweden and implanted American-style “defense of marriage” laws in Romania–then used the results back in such U.S. battlefields as California’s Proposition 8 fight.

The Global Right Wing also chronicles the battle over gun control at the UN, in Brazil, and elsewhere.  In these fights, the NRA and the global firearms network, are motivated by moral as well as material concerns.  They seek to spread the Second Amendment gospel–against a network of gun control, human rights, and development groups promoting contrary norms.

With these cases as evidence, The Global Right Wing proposes new theory about NGOs, transnational activism, and norms.
I show that “boomerang” strategies often prompt ideological foes to mobilize and throw conflicting boomerangs.   I argue that normative activism is not unidirectional.  Nor is it only a matter of positive approaches such as persuasion, grafting, and framing.  For every frame, there is a contrary one–usually one as powerful as the first.  For every moral megastar promoting one’s cause, your foe is likely to tar you with a moral monstrosity.  In pitched normative battles, opposing sides match each other tactic for tactic: they honor the institutions their foes shame; they sever the grafts their enemies fashion; they deride the authorities their adversaries esteem; and they blemish the celebrities their opponents flaunt.

On this basis, I urge scholars to turn their attention to all sides involved in transnational activism, not just the left.  I also recommend that more observers analyze the negative tactics that activists on both left and right repeatedly deploy–advancing themselves by attacking their foes.

It’s time to return the passion to our studies of transnational activism!  Not only is this a key to understanding, but it also makes our scholarship much more interesting, even fun (check out some of my footnotes).   The Global Right Wing is written in a style accessible to students, activists, and anyone fascinated by the nasty and nitty-gritty of real-world politics.

Finally, as an added bonus for those interested in bibliographic innovation–and aren’t we all?–The Global Right Wing is to my knowledge the first book to include an online, “active citations” bibliography (Moravcsik 2010), available at my website.  At a click, you can see the online sources I used–to check whether you agree with my quotations and interpretations.   What if my urls go dead?  No problem.  For sources from which I quoted directly and which are not easily available at a major research library–i.e., press releases, NGO reports, posters, etc.–I have created online links to relevant excerpts.   All of this is not mere citational gimmickry.  It is a serious attempt to allow other scholars to easily check my interpretations of key documents and thereby improve reliability and replicability in qualitative research.