HBO Has Solved Its Spoiler Problem. 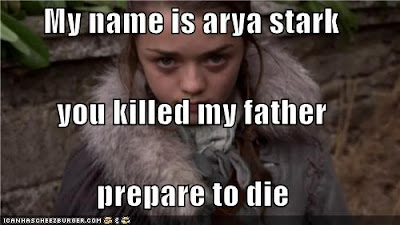 David Birtley’s to-die-for posts chronicling HBO’s deviations from the Song of Ice and Fire book series get longer each week over at Wired.

Some fans are annoyed at the significant and at times random plot innovations in Game of Thrones (in Season 2 Tywin has come off as a loving grandfather, Arya is killing all the wrong characters, and Dany’s dragons have mysteriously vanished!)

But I actually think this is nothing short of brilliant precisely because it solves one of the key issues plaguing the series: the spoiler problem.

You see, every week the latest episode is disected in the fan blogosphere and foreign policy commentariat often through reference to the books and with various references to the later story arcs in the book series. Apparently this is irritating and confusing for fans who have not yet bothered to slog through chosen to read the books. Part of the problem is the lack of social consensus, much less strong norms, about spoiler warnings. But another part is that we have been counting on the series to follow the book fairly faithfully – which it did in Season One.

Now that they definitely aren’t, things are much more interesting, in two ways. First, this maneuver neutralizes the natural advantage of book-fans. If Dany’s dragons can disappear, if Jon Snow can get captured by wildlings, and if Rodrick can have his head lopped prematurely off by Theon, then who’s to say what is going to happen next? (Maybe Robb will actually live happily ever after with his Volantene love interest… Maybe Arya will kill Tywin… Oops!) At any rate, nothing that the book fans spill into their discussions of the series will necessarily come to pass in future episodes, so TV-fans can rest easy in their obliviousness.

Also, this probably means the books will no longer be the barometer against which the series is measured. Perhaps GoT fandom will come to view both series’ as separate artifacts, parallel stories of Westeros much as the JJ Abrams Star Trek series is intended to be a highly inexact copy of the Star Trek universe. And I have to say, I think this will make the series all the cooler. After all, for the first time I now really have no idea which characters we love are going to end up horribly dead or mutilated beyond belief by the end of the season. (Oops!)

What this means for David Kirtley’s column am not sure.

P.S. I think Steve Saideman has definitely out-nerd-blogged me this week here.

If Gays Can Fight, Shouldn’t Women?

Friday Anti-Nerd Blogging: For Those About to Teach!