Mirror, Mirror upon the Wall — Who is the Realist of them All? 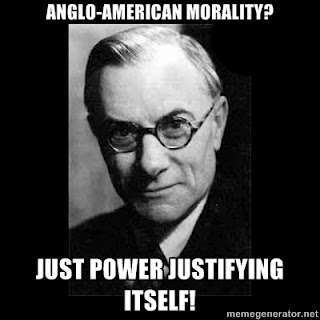 Despite Adam Elkus’s prodding, I avoided participating in the first-round beat down of Paul J. Saunders supremely stupid essay, “Giving Realists a Bad Name.” That’s okay, because Daniel Larison, Dan Drezner, and others piled on.

Saunders’s subsequent response to Drezner does make a very good point: just because you are a realist doesn’t mean you don’t have to care about “values.” Realism writ large is not logically equivalent to Meineke’s “Machiavellianism.” Unfortunately, Saunders’s justification is more Joseph Nye than E.H. Carr:

Realists understand well that perceptions are important in shaping international power and influence and, as a result, that policies disconnected from our values diminish the United States and weaken its ability to lead. Moreover, they recognize that such policies are not politically sustainable.

Dan Trombly, in turn, thinks this is the point when Saunders’s loses all credibility.

The first argument, that perceptions are important in shaping international power, is true in a sense. But it has really nothing to do with connecting our values to our policies. Realists generally choose to shape perceptions by dropping pretensions to morally grandiose visions that stake our influence or credibility on bringing the rest of the world into ideological conformity with the U.S. Realists recognize that ourvalues might not impress other governments. Indeed, policies that seem disconnected from our values, like non-intervention in other countries’ internal affairs, may be the most agreeable to foreign states. But of course, realists do morally justify their decisions – but they do it not by blindly accepting the narrative that the only policies which reflect American values require liberal intervention or democracy promotion, but by accentuating the values in American politics that have been articulated, say, by Washington, Jefferson, and John Quincy Adams rather than Wilson, Roosevelt or Reagan. Realists recognize that foolish or impractical policies of value promotion do far more damage to its international standards than its failure to be sufficiently liberal overseas, at least in the eyes of foreign powers which very often do not care about or actively oppose the kinds of American values under discussion here.

Put differently, most flavors of realism would agree that under some specific circumstances hypocrisy can be costly. But no self-respecting realist ever would make the general claim that “policies disconnected from our values diminish the United States and weaken its ability to lead.” That’s precisely the kind of wooly-headed nonsense realism stands against — the kind of thinking that, in their view, leads policymakers to engage in ideological crusades and other idiotic policies.

Hans Morgenthau argued that credibility was too often the rallying cry for pursuing an impossible enterprise to the point of diminishing marginal returns. Realists accept inconsistency as an inevitable part of foreign policy, especially moral inconsistency – and recognize the only way to reduce moral inconsistency is to be less sweeping in our moral claims and commitments about events outside our control.

Of course, none of this intellectual evisceration was ever really necessary. Saunders’s argument is, as I noted at the outset, transparently awful. Realism, for Saunders, is nothing more than a shibboleth for a hackneyed screed against the Obama Administration’s foreign policy. A screed that doesn’t make much sense even on its own terms. When I first Saunders’s original article, I thought that this was pretty divorced from reality:

In dealing with Russia, the Obama Administration courted former president Dmitri Medvedev at the expense of ties to his more influential predecessor and successor Vladimir Putin and appeared to support—with little evidence—the notion that Medvedev was more “modern” and, by implication, more “democratic.”

Because, in brief, U.S. policy toward Russia did nothing of the sort. But then I read his conclusion:

Since the U.S. economy is both an immediate and a longer-term challenge for America’s domestic health and its international role, one could argue that China, Russia and the Middle East should take a backseat to restoring sustainable growth; perhaps in current circumstances, avoiding international problems and minimizing their domestic consequences is the best the White House can do. That would not be a bold agenda, but it could be a defensible one—if President Obama were working to build domestic consensus to tackle the deficit and create jobs. The administration’s ineffective and uncoordinated half measures don’t promote either America’s security or its prosperity [emphasis added].

When an essay starts out with ‘the Obama Administration isn’t realist because it didn’t provoke a major diplomatic conflict with a rising power over a single dissident‘ and closes by pretending that the debt-ceiling crisis never happened… well, to borrow a phrase from Saunders, it is a pretty safe bet that such a person is “wholly unrealistic and un-realist.”

The World Does its Duty & Conforms to Social Science: More on Korea & Japan