More on US Allies (2): A Response to My Critics 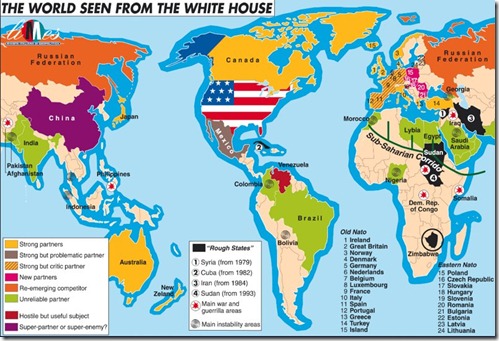 I found the above image here. A hat-tip goes to Andrew Sullivan for referencing this debate yet a second time.

Here is part one of my response to two recent, heavily-trafficked posts (one, two) on hypothetical retrenchment under Ron Paul. (So yes, that makes 4 total posts, including this one.) I got some flak on how I ranked US allies in order of importance, with the implication that those further down were more likely candidates for a diminished American commitment. Vikash and I are also having a really protracted and wonky comments debate about just how long US borrowing can forestall US retrenchment (IPE thoughts wanted). So rather than responding point-by-point, here are some broad responses on specific countries.

My ranking of US allies, in order, is: Canada, Mexico, Saudi Arabia, Taiwan, India, Indonesia, Israel, South Korea, Japan, EU/NATO, and Egypt. (That’s actually 11, not a ‘top 10,’ because I originally put Canada and Mexico in together at # 1, but whatever.)

1. Canada (#1): I was surprised how much controversy my choice for Canada at the top provoked. I thought that was pretty self-evident actually. (Stephen Walt, in a riff on my OP, says pretty much the same thing.) Just because Canada is quiet and boring (in a good way) doesn’t mean it is not existentially important for the US. (This same logic, boring ≠ unimportant, applies to my choice for Indonesia [#6]. The very fact that Indonesia is a moderate Muslim state is why no one cares about it, but that is a good thing! I guarantee you that if Indonesia had nasty salafists running around like in the ME, we’d all be talking about it. The ME≠Islam, which seems to be a new insight for far too many people.) The US trades the most in the world with Canada. We expect Canada to come with us on just about all our foreign ventures. Its cooperation provides crucial symbolic value: if the country most like us in the world can’t agree with us, then we must be doing something wrong (hint: Iraq). And most obviously, its security is a direct US concern, because of the border. In fact, given that the border is something like 3x the length of the US-Mexico border, Canada easily beats every other state in the world for the most basic US national security concerns.

2. Japan (#9): A good commenter noted that after WWII, the US wanted to make Japan into the ‘Switzerland of Asia,’ and that we are reaping what we sow. Absolutely. I do think Americans send mixed signals to allies. We don’t want them taking an independent line, we want them to do what we say, but then we complain that they free-ride. As I argued in the OP, all this US commitment ‘infantilizes’ US allies by not forcing them to deal with their own regional issues. But Americans, or rather the neocon-liberal internationalist elite synthesis that dominates US foreign policy discourse, ultimately accept weak, dependent allies, because we are in love with our own hegemony. It fires our imagination to compare ourselves to Athens, Rome, or Britain. Neocons read Pericles’ Funeral Oration or Gibbon, and they tear up that America too is the noble, tragic ‘weary titan,’ carrying the great orb of its world-historical task of spreading democracy. Americans thrill to that kind of ‘national greatness’ pseudo-metaphysics while Europeans roll their eyes in disillusionment and Asians wonder wth we are even talking about. So yes, free-riding is pretty obvious to see, because we abet it.

3. Europe (#10). I think Sean Kay’s essay on retrenching from the EU nails it. “If the United States cannot disengage from Europe now, then from where in the world can it?” You said it, brother. If we can’t reduce here, that means American alliance sprawl is basically locked-in forever and that we simply incapable of strategic choice. I take the obviousness of retrenching from the EU as all but self-evident 25 years after the Cold War. Similarly for Australia. Between Australia and Asia is gargantuan Indonesia, so aren’t we encouraging Aussie free-riding by putting troops in Darwin? More sprawl…

4. Israel (#7): I was surprised I didn’t get more pushback that Israel should be even higher. I guess no tea-partiers read my site. Oh well. Because if you listened to the GOP debates in the last 6 months, the Israel love-fest was just over-the-top, as if Israel is/should be America’s #1 ally. I support the alliance too, but it seems today in US politics that the central alliance litmus-test is Israel, not Mexico, NATO, SK, Taiwan, or India. This is why I expressed a lot of skepticism over the Asian pivot. I think the US should pay more attention to Asia, but I don’t think the US electorate really cares.

5. Indonesia (#6) and Turkey (not on the list). I took some heat for not including Turkey and putting Egypt at the bottom (#11). Ok. But again, I tried to use a ‘top 10’ as a heuristic to force limits. Maybe Israel or Taiwan or SK could be dropped for Turkey. But more generally, I do think we have really overhyped the ME in the last decade. Elsewhere I argued that we broadly misread 9/11 as the first step in a ‘long war’ of waves of salafist extremists coming after us. That just didn’t happen. Binladenists are scary, but there aren’t that many of them, and 9/11 was a one-time sucker punch when we weren’t paying attention, not the start of massive umma-wide uprising. So Turkey is not as valuable to America as we think perhaps. It is important for the EU and Israel, but not so much for US. Insofar as Egypt sits astride the canal and is the heartland of Arab thought, which is where the pathologies of 9/11 are worst, it too ranks above Turkey – only just though. I would probably put Turkey in at 12. But the real story of American commitment in the Muslim world should be Indonesia. Not only is it valuable as a bulwark against Islamic extremism where the majority of the world’s Muslims live (SE Asia), it’s also a valuable hedge against China, and it’s the fourth largest country on earth.

6. Mexico (#2) doesn’t strike me quite as high as Canada, in part because the US got along fine for a long time with hostility from Mexico. Mexico doesn’t have the potential to threaten the US as Canada ever might (the border is smaller; it’s further away from America’s east coast center; its economy has been only semi-functional for almost 2 centuries; it’s culturally more distant so there’s no symbolic quality). Mexican stability and growth are obviously strategically more important than every one else but Canada – way beyond Israel, the EU or the Koreans. And I will concede that Mexico is a greater concern at the moment and in the near future, and will absorb more US effort and money than Canada.