Collective action and the end of the world

2012-07-19 / PM / 20 Comments
Today I gave a lecture on the environment and the dilemmas of collective action in my course on Introduction to International Relations. Despite the best efforts of St. Elinor (the patron saint of political science and my alma mater), I’m still a fairly pessimistic adherent to Mancur Olson’s diagnosis of public-goods provision. Consequently, the environmental lecture (“Saving the Sunlit Earth”) is probably my most depressing canned talk. (The “sunlit earth” comes from a speech by Nobel laureate F. Sherwood Rowland, who co-discovered CFCs’ harmful effects.)
Simply put, unlike the Montreal Protocol that reduced CFC emissions and put the ozone layer on track to be healed within a century or so–a smashing success for environmental diplomacy, and no I’m not being sarcastic–the number of countries involved in negotiations on climate change and the distribution fo the costs and benefits of reducing CO2 emissions make me so despondent over the chance for a lasting agreement that I’m pretty glad that I’ll likely be dead before the ice caps are completely melted.

To illustrate my argument, I downloaded the most recent stats on CO2 emissions I could find and cranked them through Stata. As we can see, per-capita emissions in the rich world have been relatively constant or even declining since 1990: 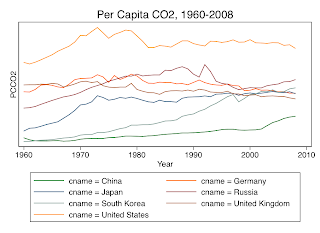 But those modest increases on a per-capita basis in China and South Korea have nevertheless yielded tremendous shocks to total CO2 output. 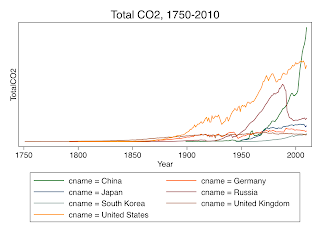 Astonishingly, China–which produced about as much CO2 in 1950 as Great Britain had in 1750–now produces more CO2 than the United States did in 2000. And, of course, the first and second derivatives on that time series are positive.
I’m glad to see social scientists paying more attention to these issues. Frankly, if the threat of great-power conflict was the animating purpose for international relations theorists to get out of bed in the morning during the post-World War II era, I think it’s fairly clear that issues relating to political economy–and global climate change is, at root, a political-economy problem–should drive us in the post-Cold War era.
Below, a Google n-gram of the relative popularity of the two types of end of the world: “nuclear war” and “global warming.”

I’m going to use this to begin my most optimistic lecture of the semester, which about nuclear weapons.