Scenes from the National Museum of Scotland, Part the Second

2012-07-19 / Daniel Nexon / 0 Comments
In my previous post I mentioned the recent broadside against Brave for its anti-Pictish discourse and representations. I’m not being fair, of course, as its author, Melissa McEwan, doesn’t use the term “Pict” any time during her essay. Which is interesting, insofar as Brave is saturated with Pictish symbols. As an astute commentator notes:

The Scots are represented not as a homogeneous group but as a diverse people, including ethnic differences from Pictish, Celtic, and Viking ancestries. While you may choose to see this as an Othering, it is a step above the kind of racial elisions that tend to happen with Native Americans in films (since that got mentioned.)

Regardless, the original post and subsequent exchanges illustrate nicely what happens when there’s a kernel of truth heaped beneath the crazy, but the crazy emerges triumphant.

Of course, one persons’ serious of ethnic slurs is another’s nationalist myth making. Hence I was not terribly surprised to learn that the National Museum of Scotland has embraced Brave wholeheartedly. 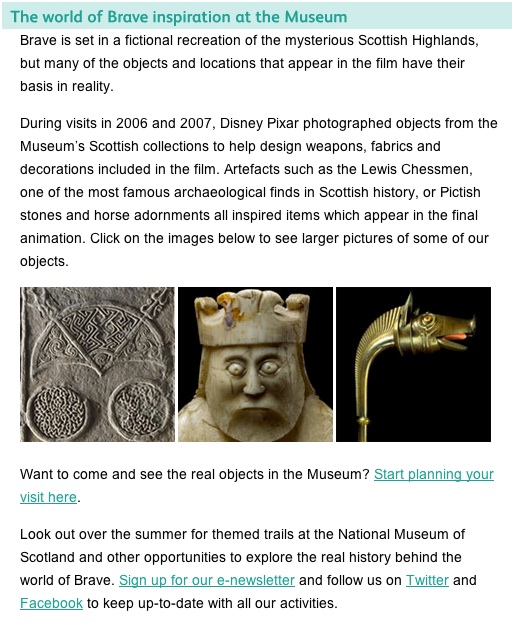 So while McEwan (who, naturally enough, admits to never having seen the film) complains about the stereotyping “Scottish people” as using “silly instruments,” the embedded link makes clear she has bagpipes in mind.  Bagpipes, which I hardly consider “silly,” are in Brave. But I first thought, rather naïvely in retrospect, that the discussion was sophisticated enough such that she was referring to the carnyx (the rightmost picture above), which makes a prominent appearance in the film.

Listen to a Carynx.
But to return to my main point, about how one person’s ethno-chauvinist mockery of a not-so-oppressed American minority is another person’s nationalist myth-making, let us return to the National Museum. There, a significant chunk of the symbolic repertoire on display in Brave finds itself presented at the cultural origins of the Scottish nation. Lest their be any doubt about that, consider the sign pictured below.

A postscript: I enjoyed Brave and all that, but for a series that combines excellent narrative, strong characterization, moral ambiguity, excitement, suspense, deep research, and the kind of exoticicizing of white ethnic “others” that would make McEwan’s head explode, check out Nancy Farmer’s Sea of Trolls series.