Here is a word cloud of the speech’s foreign-policy content: 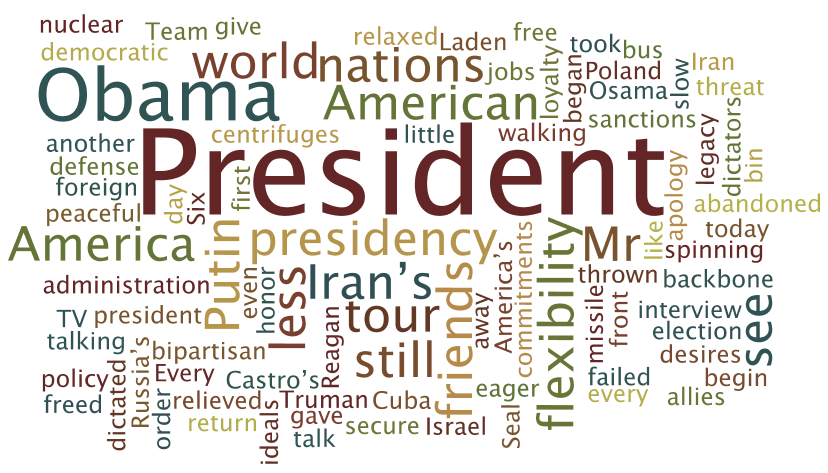 In this case, the cloud adds virtually nothing to our understanding, as the entire section is only 202 words long.

Below is the section itself. It appears that the speechwriters pulled random posts off of PJ Media, stuck them in a blender, and were satisfied with the results.

I will begin my presidency with a jobs tour. President Obama began with an apology tour. America, he said, had dictated to other nations. No Mr. President, America has freed other nations from dictators.

Every American was relieved the day President Obama gave the order, and Seal Team Six took out Osama bin Laden. But on another front, every American is less secure today because he has failed to slow Iran’s nuclear threat.

In his first TV interview as president, he said we should talk to Iran. We’re still talking, and Iran’s centrifuges are still spinning.

President Obama has thrown allies like Israel under the bus, even as he has relaxed sanctions on Castro’s Cuba. He abandoned our friends in Poland by walking away from our missile defense commitments, but is eager to give Russia’s President Putin the flexibility he desires, after the election. Under my administration, our friends will see more loyalty, and Mr. Putin will see a little less flexibility and more backbone.

We will honor America’s democratic ideals because a free world is a more peaceful world. This is the bipartisan foreign policy legacy of Truman and Reagan. And under my presidency we will return to it once again.

As some have noted, the section is particularly notable for the absence of Afghanistan. That’s correct. The US is currently fighting a war and it rated not a single mention in the speech of the GOP nominee for President. We are through the looking glass, people.

Despite my snide comments, I think there’s an important debate to be had over how the Washington calibrates its relationship with Moscow. But what worries me about Romney is that the only setting seems to be ‘major geo-political threat,‘ which overestimates both Russian strength and US weakness while foreclosing opportunities for cooperation based on mutual interest. Such an approach won’t lead Russia to change any of the policies that nettle US policymakers, and may make Moscow even more difficult to deal with. We’ve been there and done that in the second Bush term, and it didn’t work out well for anyone.

The Romney team also have a point about Poland. The administration botched the rollout of PHAAD and the cancellation of the “third site” BMD program. Warsaw was, in fact, pretty upset. But that was three years ago; I’m not sure why “No-Apologies Mitt” feels compelled to keep on apologizing for it. Still, I am not entirely clear on why the administration continues to negotiate with Moscow on BMD beyond the theory that it is better to keep them talking even as the program goes forward.

Romney’s inadequate genuflections toward foreign-policy issues reflect their marginal place in this campaign. What little we’ve learned suggests a factually-challenged view of the Obama Administration’s foreign-policy rhetoric. It also appears to signal a commitment to the views that captured Bush foreign policy after September 11, 2001.

Neither of these are good things, but they don’t necessarily tell us much about how Romney will lead the United States in the world. As PTJ and I recently discussed, this is more about value articulation and commitment than substantive policy… which pretty much sums up not only Romney’s speech but also the general idiom of a campaign loathe to focus on programatic details.

In some ways, the most momentous foreign-policy line was Romney’s applause-line on climate change.

President Obama promised to begin to slow the rise of the oceans. And to heal the planet. My promise is to help you and your family.

At one level, this was a pretty good dig at Obama: it nicely crystalized the idea that Obama promised the moon but delivered a eight-percent unemployment rate. But it also signposts one of the most consequential ways that we’ve failed our children — and the important role played by the modern Republican party in that failure. Perhaps, if elected, Romney will be able to move his party to where he stood but a few years ago. If so, that will outweigh a great deal.

“Against Dogmatic Bourgeois Flunkeyism,” or what I learned in NK (1)