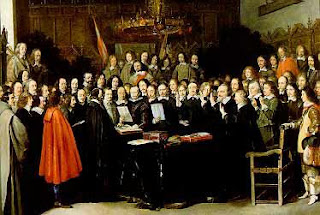 Charles Hill has a storied and impressive career, successful books to his name, and a prestigious position at Yale University. He’s also repeating historical tripe:

“The way the world through almost all of history has been ordered is through empires. The empire was the normal unit of rule. So it was the Chinese empire, the Mughal empire, the Persian empire, and the Roman empire, the Mayan empire.”

What changed this was the Thirty Years War in Europe in the 17th century. “That was a war between the Holy Roman Empire and states, and states were new. They had come forward in northern Italy in the Renaissance and now they were taking hold in what we think of as a state-sized entity. The Netherlands and Sweden and France were among these. . . . France was both an empire and a state—and the key was when [Cardinal] Richelieu took France to the side of the states, which was shocking because France was Catholic and the empire was Catholic and the states were Protestant.”

Our modern concept that war should be governed by law dates from the era. “It was so awful that it produced Grotius,” the Dutch philosopher of international law.

It also produced the Treaty of Westphalia [sic]. “What they did in creating something to prevent another Thirty Years War, they put in place what would develop into the international state system. . . . This is a work of genius, probably inadvertent in some sense,” Mr. Hill says. “To be a good member of the international club you had to follow minimal procedures. . . . You could be Catholic or Protestant, but you had to be a state. So the state then replaces the empire as the fundamental unit of world affairs [emphasis added].”

Naturally, this derives from a recent book he’s written that rehashes what should be familiar ground to Duck of Minerva readers:

A Muslim has no nationality except his religious beliefs,” said Egyptian Sayyid Qutb, a key figure in the world of political Islam who was executed by the secular regime in his homeland in 1966. For decades, the ideologues of pan-Islam have refused to accept the boundaries and the responsibilities of the order of states. In Trial of a Thousand Years, Charles Hill analyzes the long war of Islamism against the international state system. Hill places the Islamists in their proper historical place, showing that they are but the latest challenge to the requirements that states had placed on themselves since the international system was born in 1648.

Look, you don’t have to read my derivative book to understand why whatever truth lies beneath is buried in the mud of historical falsehoods. You can check out Andreas Osiander’s classic International Organization article (PDF), Benno Teschke’s Myth of 1648, and Benjamin de Carvalho et al.’s “The Big Bangs of IR: The Myths That Your Teachers Still Tell You about 1648 and 1919.” Or you can take a look at one of my previous rants on the subject.

Can We Take Politico Out Back and Shoot it Yet?