Phil Arena has been playing around with alternative measures of military power. He begins with the straightforward observation that one current and popular measure of military power, the CINC scores in the Correlates of War project, list the United States as having fallen behind the People’s Republic of China in its military capability. As Phil writes, this is not a conclusion that most, if any, observers of world politics would endorse–and that even if it is true in the broadest sense (that in some total war between the United States and the PRC, the United States might not be able to conquer China) that it is not particularly useful.

Phil lays out the broader points of his critique–namely, that CINC overweights raw materials and does not adjust for quality of militaries–in his post. Using a new measure based on COW data, computed as he describes at his link, he proposes an alternate measure–one I think that the Duck’s readership should at least be aware of. This measure may get closer to the notion of who has the most usable military power at any given point in time. I’ve redone his graphics slightly but the data is all his. 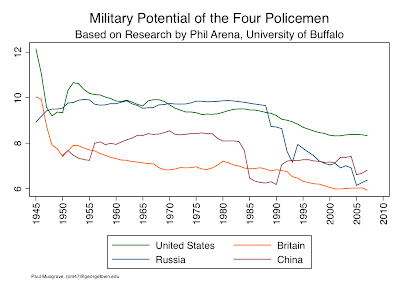 In the first chart, we see the post-World War II relationship among Roosevelt’s “four policemen.” This chart, I think, accords pretty well with our understanding of the period: the United States begins and ends the period as the world’s most powerful military force, but during the Cold War its military potential (in conventional terms) was on par with the Soviets. (I know this point could be debated, and has been, ad nauseam, but it is not prima facie invalid.)

The value of the alternate measure becomes a little clearer when we consider the period 1816 to today. 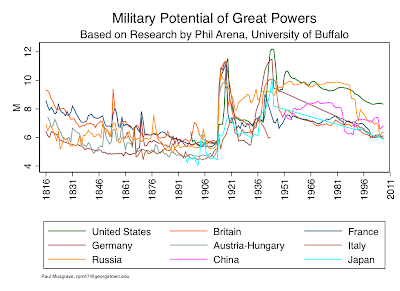 Here, we see the long peace of the 19th century reflected in the gradual build-down of European militaries (although note Germany’s relative rise over the late-nineteenth century). We also see, as we would expect, that actual forces-in-being peak in the two world wars (and that the United States, in both cases, emerges as the world’s leading military power–although it dismantles its military quickly after 1919). More important, we note that the leading powers of the 21st century — the United States, China, and Russia — are quite literally not on the map in the 19th (and if Japan were ever to begin behaving as realism says it should, it would join the new quartet). Moreover, eras of multipolarity, bipolarity, and unipolarity are fairly easily identifiable in this chart.

The question of how to measure international capabilities is a tough one, but I tend to think that decomposing military strength and military potential is a useful start. (In the short run, we care a lot about strength; in the long run, we care a lot more about potential.) Since all such measures–even GDP!–are ultimately somewhat arbitrary, it is at least useful to have a debate about what we should include in each. Duck readers, what would you include in your measures of international power?

The Great Journal Impact Factor Race, Web 2.x, and the Evolution of the Academy