The Great Journal Impact Factor Race, Web 2.x, and the Evolution of the Academy

Back in May Robert Kelley touched off a discussion about Journal Citation Reports and impact factor rankings. Journal impact factor provides a textbook study in the consequences of a well-institutionalized but highly problematic quantitative measure. Impact factor is highly skewed, easily gamed, and somewhat arbitrary (two-year and five-year windows). Nonetheless, it drives a great deal of behavior on the part of authors, editors, and publishers.

Impact factor, of course, is just one objective in the pursuit of prestige. Editors, boards, and associations want the status that comes with being involved with a “leading journal.” Publishers want that prestige as well, but only for its intrinsic value. For publishers prestige, profile, status.. these matters because they separate the journals that a library “must have” from those that the library can do without. So journals such as International Studies Quarterly and European Journal of International Relations remain valuable and prestigious commodities even if they’ve had a few “bad years” in terms of impact factor; very few international-relations scholars, let alone librarians, are going to ditch them in favor of Marine Policy.

I’ve learned a great deal about impact factor and “prestige” over the course of two editorial bids; indeed, one of the things I’ve stressed is how far behind the curve most international-relations journals are at exploiting new media to boost citation counts and the general profile of the journal. Publishers think so too. Indeed, they’d like authors themselves to pick up some of the burden. Here’s an email from SAGE that a friend of mine sent along earlier today (each page is an image, so if you have trouble reading them click on each to enlarge): 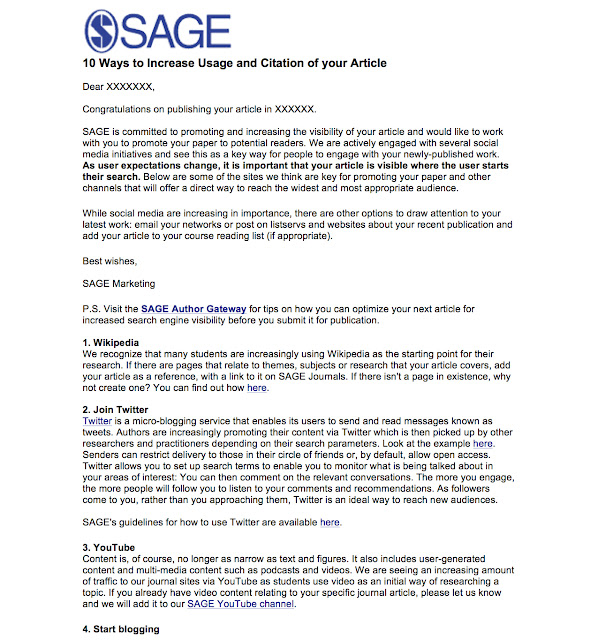 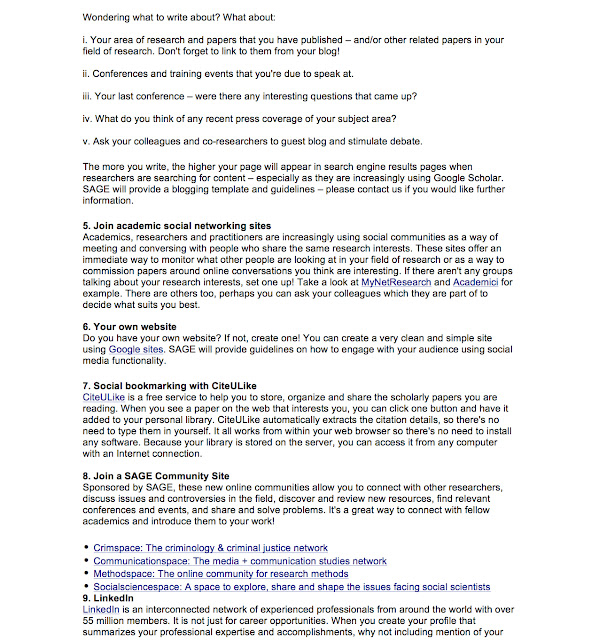 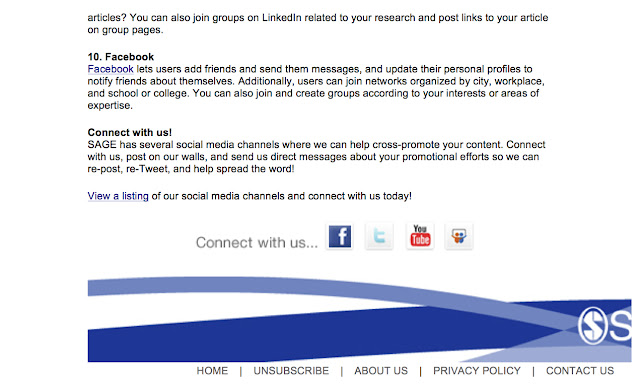 This is pretty amazing stuff — on a number of levels.

SAGE covers virtually all the bases, from maintaining an Academia.edu account, to tweeting, to creating a website. They want their authors not only to self-promote on wikipedia, but also to take up blogging.
I’m not sure I’m cool with this. SAGE is asking academics to make significant time commitments. For most article authors, these commitments aren’t commensurate with the benefits they’ll receive. It isn’t as if taking of tweeting instantly makes you an important figure in your area of expertise. My sense is that the RSS feeds of most international-relations and political-science blogs have fewer than fifty subscribers, which suggests typical readership in the dozens. This means that the marginal benefits of the most intensive activities SAGE recommends aren’t likely to be worth the costs in time and effort.
But journals don’t require these efforts to realize large payoffs. The most successful international-relations journals might achieve two-year impact factors of between three and four average citations per article. Once we get below the top few then we are talking about journals with between one and two average citations per article. The benefits for publishers such as SAGE then, is potentially quite significant. If all that effort generates fewer than ten additional citations for relevant articles, they still might see their journals (easily) catapulted up the rankings.
At the same time, I also feel a bit vindicated. This reinforces my sense — articulated best by Charli and Dan Drezer — that we’re going through a major transformation in the relationship between international studies and Web 2.x activities. Popular writers have long been doing — with the active encouragement of their publishers and agents — most of these things. Indeed, pretty much every author I’ve asked to interview for NBN’s SF and Fantasy channel maintains some combination of blog, website, twitter feed, Facebook presence, livejournal account, and so on. They have to: their income depends on their sales and their relationship with their readers.

The authors of the Duck aren’t exactly strangers to most of these methods of shameless self-promotion. Still, most of us got into new and social media for fun and community rather than for profit. I remember routinely having to justify my blogging activities to my friends, mentors, and colleagues. How times have changed.

At least those are a few of my disparate reactions. I wonder what our readers think.