In Weapons Advocacy as in Health, Prevention is Better Than Cure 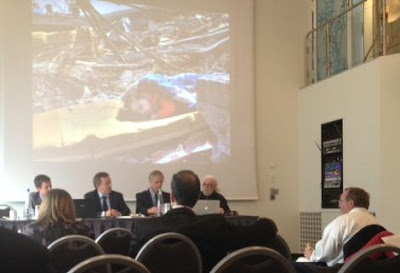 A heavily attended side-event today was the Norwegian Red Cross‘ panel discussion “Looking Back to Look Forward: The Cluster Munitions Convention and What it Means for Limiting the Impact of Other Weapons Systems.”

Richard Moyes, coordinator of the International Network Against Explosive Weapons, presented a compelling address about the importance of regulating the use of explosives in populated areas, and putting the burden of proof on states to document the humanitarian costs of the weapons they use in conflict zones. University of Sheffield’s Noel Sharkey presented on the dangers of trends toward increasingly autonomous weaponry. And Peter Herby, head of the International Committee of the Red Cross’ Arms Unit, had a clear message for delegates and NGOs that tied together these specific calls for action: states need to do more to properly review the humanitarian acceptability of weapons – cyber-weapons, non-lethal incapacitants, autonomous weapons, nano-weapons, bio-weapons and others – before they are widely deployed.

States have long been required to do so under Article 36 of the first 1977 Additional Protocol to the Geneva Conventions, but according to Herby as few as 12 signatory governments have established mechanisms for actually reviewing new weapons before they are deployed. And nor is there any independent body responsible for overseeing those reviews, as exists other areas of global governance. More typically, weapons development proceeds apace until some outcry from civil society, as is now beginning to happen in the case of autonomous weapons.

But this outcry is often too slow in coming: civil society has historically been likelier to condemn weapons already in widespread use than new weapons whose effects are uncertain. The reason is simple: it’s much easier to conduct ‘remedial’ campaigns on issues where widespread humanitarian harms have already been documented, as a combination of testimonial and statistical evidence of a problem is often a prerequisite for creating a sense of urgency around an issue. Thus campaigns against landmines, cluster munitions, incendiaries and explosive violence have emerged in recent years only after decades of mounting and evident civilian harms.

Nonetheless, as Herby emphasized today, “prevention is better than a cure.” And as he pointed out, pre-emptive bans are not unheard of nor necessarily infeasible: two important examples are the ban on exploding bullets promulgated by Russia in the nineteenth century at the behest of military specialists; and the ban on blinding lasers negotiated in 1995, before the widespread deployment of these weapons. In the case of nuclear weapons in particular, Herby said:

“The only option is prevention. This is an area in which we need to make efforts because remediation will be too late.”

Richard Moyes of Article36.org, an NGO dedicated to humanitarian disarmament, echoed Herby’s sentiments regarding nuclear weapons in a response to an ICAN representative’s query on how to move forward to a nuclear ban:

“You can feel a sense of momentum already in that direction, a fairly clear concept of a treaty prohibition on nuclear weapons is starting to take holds in a number of people’s minds. I think we can take confidence from the CCM that we can learn from communities that worked together on that. And I think we can learn from the overall standard-setting initiatives here as well, that we need to take it into our own hands to establish the standards we want to see in the world, not sit beholden to those who hold over our heads weapons capable of killing thousands of people in an unacceptable way. We as a community can start to address that, states without nuclear weapons can start to address that, we don’t need to wait to have nuclear armed states on board to articulate a treaty prohibition on these weapons. We need to make clear those weapons of mass destruction need to go the same way as chemical and biological weapons, landmines and clusters, subject to a straightforward prohibition on their use, stockpiling and production.”

Foreign Policy to the Fore: Is Romney Below the Bar?