RNC: Don’t Speak in a Publicly-Built Facility when you Attack Government – D’oh! 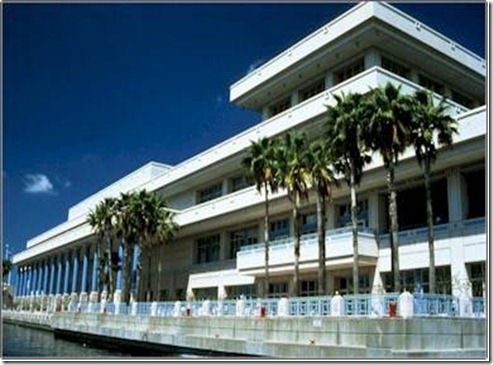 I got bogged down with NK for awhile, so I missed a chance to comment on the RNC and the US election more generally. I have some thoughts after the break, but a Democrat friend of mine wrote the following, which is a pretty good first draft of the GOP’s problems I think, in this election cycle:

On the whole, I found the Republican convention disgusting and not simply because I disagree with their policies. They substantively are disconnected from the problems of the average person. They offered nothing which will help average people and, what they do offer, is bereft of details. They said nothing – NOTHING – about the two wars they started and the one that is still ongoing. (They do however feel we should have wars, or at least brinksmanship with several other countries.) They have no narrative connecting who they were just four years ago with who they think they are now.

The narrative they do present is a fantasy beyond what even Republicans of a prior generation would present. They stand in a publicly-built convention center preaching nothing but disdain for the role of government. They parade women, Latinos and an African-American secretary of state who talk about the ‘bootstrap’ mentality of their parents with no mention of the giants of civil rights and the role of government which reformed the bigoted society which their beloved founding fathers gave us. That reformation – more than their parents – allowed the likes of Condoleezza Rice to be where she is today.
They reach out to women with symbolism and yelps of ‘I love you women,’ but want to savage Medicare and Medicaid, both programs disproportionately benefiting women (remember, Medicaid is also a program for the elderly medical class who enter nursing homes). They are utter hypocrites on things like government stimulus – Romney first supported it and Ryan voted for Bush’s Tarp and took money from Obama’s stimulus. Even by politicians’ standards, their willingness to lie about Obama’s policies and statements is breathtaking.

But what bothers me the most is this ‘we built it’ mentality which they go on with. The US’ post-war middle class and social stability would not have existed without government. Support for college education, a redistributive tax structure, a modest social safety net, civil rights, Keynesian counter-cyclical spending, massive government infrastructure programs from highways, to the space program, to the defense establishment contributed mightily to every American’s success. This includes the success of their plutocrat leader Mitt Romney who made his money during the tech boom of the 1990s, a tech boom built on government research in computers and the internet. It includes the success of his running mate Paul Ryan whose family made much of their money building government-funded roads.

I would add that I wonder how much ‘risk’ himself Romney has ever actually taken, given that dramatically pairing back the welfare state is emerging as the GOP meme for this election? If the Randian superman who ‘built it all himself’ is the economic ideology of the GOP, then it becomes central just how much Romney, Ryan, Cantor, Limbaugh, etc. exploit government services. Ayn Rand herself accepted Social Security and Medicare late in her life. That strikes me as fairly fraudulent, as does insisting that SS and Medicare be retained for today’s elderly but not tomorrow’s. I’m sure that the likelihood of older voters to vote GOP and younger voters to go for Obama has nothing to do with that.

For example, did Ryan try to steer government money into his district, as a congressman, as most congressmen do? If he did, isn’t that hard to justify given what he’s saying now? It seems increasingly obvious that Romney never did without in his life in a meaningful way, never went through a ‘back in grad school when I lived in a crappy apartment and ate ramen’ phase. He “refused to head up Bain Capital until Bain promised him he would get back his old salary and interest if he failed. He risked nothing.” He’s also done a fair job of using the government to make a mountain of money – whether that be fixing the Olympics, getting a sorta government bailout, using a battery of accountants to gin up such amazing tax shelters that he doesn’t want to release his returns, or working in government itself – governors get paid a lot more than most Americans. I don’t mean to begrudge Romney his success, but profiting handsomely from government while you promise to tear it down for those who come after you strikes me as fairly selfish.

More generally, I would ask how the GOP thought that a guy who’s practically a caricature of Gordon Gekko could get elected just 3 years after white shoe banking nearly wrecked the world? That just staggers me. And the scandals that continue to come out – LIBOR most recently – have made it obvious to just about everyone except Jamie Dimon that Wall Street needs a tighter regime, most obviously the Volcker Rule. Given just how much we’ve all learned about the financial industry since 2009 (in a bad way), I can’t imagine Romney – who’s so obviously steeped in the values of that class, right down to his perfect hair and willingness to say anything to please – winning. I can’t imagine Tea Partiers, who share the Occupy Movement’s disdain for too-big-to-fail banks and slick ‘masters of the universe,’ being enthusiastic for this guy either. Good lord, even Sandy Weill is now saying the banks need to be broken up. Yet in the first presidential election after the mostly-Wall-Street-caused Great Recession, we’re going to elect such an obvious product of the financial services industry? Wow. God help me for saying it, but where’s Santorum or Bachmann (at least they were honest) when you need them? It’s a measure of just how bad the economy is and just how weak a president and candidate Obama is that Romney is competitive at all.