The Triumph of Liberal Internationalism?

Robert Golan-Viella reflects on a tectonic shift in partisan foreign-policy debate, i.e., the fact that the Democrats have the upper hand. He chalks this up to campaign politics: the key to a Republican victory runs through the economy. I agree that there are “strong critiques” of Obama foreign policy and that “leading Republicans aren’t making them.” But I don’t think this is “politically smart,” insofar as leading Republicans are making attacks on Obama foreign policy–just not very good ones.

As Blake Hounshell noted on twitter of the latest broadside from the Romney campaign: 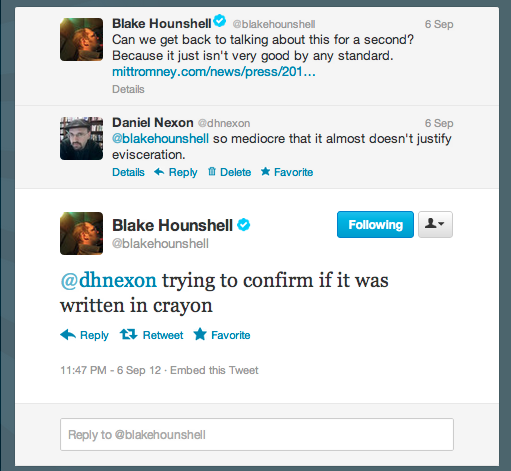 I expect that I will return to this theme on a number of future occasions, but I should note that this is something quite similar to what’s been happening on the domestic politics front.

While there’s plenty of room to eviscerate Obama, the Republicans have painted themselves into an ideological corner from which they’re forced to make a lot of deeply questionable claims. This is what happens when you’ve convinced your base that the label “socialist” is broad enough to include a center-right President whose major domestic initiatives — national Romneycare, a tax-cut and infrastructure oriented stimulus, a cap-and-trade approach to reducing carbon emissions — were mainstream Republican positions only four years ago.

Indeed, the fact is that Obama foreign policy doesn’t look that much different from what Bush was doing in the later part of his second term. Sure, the Obama Administration cancelled an inferior BMD program and replaced it with a better one (props to Sean Kay for that phrasing). But on Iraq and Afghanistan Obama largely followed the path developed toward the end of the Bush administration. Even its position on Iran is evolutionary rather than revolutionary. Obama’s more explicit offer to engage with Iran  highlighted Teheran’s intransigence; to the extent that it “worked,” it did so by generating greater international support for tougher sanctions — it convinced other countries to get behind preexisting US policy. Even the “Israel” issue is often more about style than substance (cf. Erik Voeten on the status of Jerusalem).
In that sense, it isn’t surprising that Russia has become a focal point. The “reset” policy really was a break from Bush foreign policy. On the one hand, though, that “break” has worked to secure Bush administration objectives, such as expanded transit routes to Afghanistan via Russian territory. On the other hand, we can imagine that McCain administration might have been much more aggressive on Georgia and not have pursued New START. I can see a case for recalibration of the US policy toward Tbilisi, but August 2008 pretty much revealed the limitations of full-throttle support for Georgia.
Nuclear-weapons policy, however, provides an opening for real attack on the Obama Administration. But once again, we’re not getting substantive criticism about nuclear doctrine but rather blog-serious level discourse about selling out US interests to Moscow on BMD and the aggregate size of the US nuclear arsenal. Recall that US-Russians relations have deteriorated lately precisely because Washington won’t capitulate to Moscow on matters such as Syria policy or EPAA.

One lesson of this, I think, was that we didn’t need all of that “security Democrat” handwringing during the first five years after 9/11. Remember all those people who were in a tizzy about how liberals and progressives needed to come up with “new thinking” to respond to the neoconservative challenge? That all looks pretty silly now. The Obama Administration’s foreign policy fits pretty squarely within the broad liberal-internationalist tradition, albeit with, on some issues, a significant lean toward its “pragmatic realist” variant. Indeed, with a few exceptions — such as the aforementioned disaster that was US policy toward Georgia — the Bush administration basically abandoned neo-conservativism after the 2006 midterms.

That’s not to say that we won’t get another taste of neoconservative crusading bluster if Romney wins. My guess is that his impulses aren’t in that direction, but foreign-policy novices often go where their advisors take them. But I think what the record of the past two decades suggests is pretty clear: Republican and Democratic foreign-policy centrists never needed to “rethink” anything. Their ideas have acquitted themselves quite well. Neo-Reaganite foreign policy? Not so much.

Society for the Prevention of Cruelty to Methodological Tools: Social-Network Analysis Alert