Are Sandy and Climate Change Related? Part I 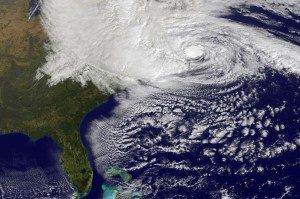 In the aftermath of Hurricane Sandy, there is much discussion about whether climate change was responsible for the storm. I’m not sure this is the right question we need to be asking, unless we think that whether we respond to climate change hinges on an affirmative answer.

Let’s suspend disbelief for a moment and say that it does. We need to believe events like Sandy were caused or made more likely by climate change in some way for us to feel compelled to act.

If so, is that connection real? I think we have to separate what we know about the science of climate change and extreme weather events from our political objectives. In terms of what we know, I think the scientific community has mixed responses about the connections, but in terms of the politics, it absolutely makes sense to connect the spate of recent extreme weather events and climate change. The presidential candidates have been silent about climate change, and because of Sandy, everyone is talking about climate change again. So, in terms of the narrative of what climate change means, connecting the dots in this way is important political communication. Let me start to unpack those ideas below in the first of a series of posts.

Is this even the right question?
Before I delve into what the scientists are saying about the connections between climate and Sandy, let’s step back and ask if this is the right question to ask. Dave Roberts at Grist magazine worries that asking whether climate change caused Sandy might not be the right way to approach the problem.  He notes that every time there is a weather phenomenon that plausibly can be linked to climate change activists seize on the event to try to draw attention to climate change. They are then are countered by “scolds”, journalists and others who tell them that they have gone too far. Drawing on climate scientist Thomas Crowley, this is called “reverse tribalism,” an attempt by people in the climate community to be taken seriously by the wider world by deliberately distancing themselves from their natural allies in the advocacy community. As a consequence, the scolds like journalist Andrew Revkin veer too far in the other direction, making the climate change problem sound less severe than it actually is:

What this means is that scolds offer the public a confusing, nuanced portrait of probabilities and contingencies and uncertainties when what is needed, in Roberts’ view, is unequivocal language that motivates the masses to press for political change. But for the scolds, this doesn’t work:

If you take murky probabilities and state them as categorical truths, you’re being dishonest. If you claim a hurricane is connected to climate change before there’s solid evidence that it’s outside the range of natural weather variability, you’re being dishonest. Maybe activists are allowed to do that (scolds imply, with proverbial noses in the proverbial air), but journalists and Serious People are not.

I’ll come back to the implications of this with respect to political communication, but as someone who has sought to be taken seriously by both the foreign policy community and academics on climate change and security, I think Roberts’ observation is on point. In my 2008 Security Studies piece, I went after Al Gore’s slide show on climate change (particularly with respect to sea-level rise, a more longer term phenomenon), even though I largely agree with him.

In my next post, I’m going to answer the question what do the scientists tell us about climate change causing Sandy? It’s not an easy one to answer, and those of us who follow the issue closely but who are not natural scientists have to be careful. As a preview, I’m linking some important stories by a number of science and environment writers like Andrew Revkin, Laurie Garrett, Brad Plumer, Elizabeth Kolbert, and Andrew Freedman who have already waded.