Regional Variation in the Explanatory Power of War and Reason

Many conversations about the empirical relevance of game-theoretic models of war begin and end with Bueno de Mesquita and Lalman’s War and Reason.  That’s unfortunate, but it’s not exactly surprising.  Most game-theoretic studies of war do not include any empirical analysis, whereas War and Reason offered a systematic analysis of European dyads.  The standards by which BdM and Lalman would have the predictions of the International Interactions Game (IIG) be judged are clear.

In the Behavioral Origins of War, Bennett and Stam seek to assess the relative explanatory power of all the major theoretical explanations for war, including the IIG.  Not only do Bennett and Stam report that other variables outperform those associated with the IIG, they assesses the model’s reliability across time and space.  They find that the variables associated with the IIG predict behavior in Europe reasonably well, the Middle East and Asia somewhat less so, and they provide a worse than useless account of conflict occurrence in the Americans and Sub-Saharan Africa.  That is, conflict occurs less often in these two regions when the IIG predicts war than when it does not.

Bennett and Stam interpret this as evidence that the IIG assumes distinctly Western preferences, and so it’s explanatory power is limited to Europe.  In fact, implicitly treating the IIG as representative of all of “rational choice”, they go so far as to conclude that “rational choice” is more applicable to the Western world.

That’s a bold claim.  It’s also one that many critics of “rational choice” will find intuitively appealing.  Of course rational choice only applies to the West, one might say.  (Especially if one conveniently overlooks the fact that one of the two problem regions is the Western hemisphere…which I thought was pretty Western.)  Game theory makes no allowance for the importance of honor, after all.** How could anyone even doubt Bennett and Stam when they say that regional variation in the explanatory power of the IIG demonstrates the importance of culture?

Well, there’s just one little problem — in order to infer that actors who do not behave according to the predictions of a particular game-theoretic model do or do not hold a given set preferences,*** we have to assume that they were in fact playing precisely that game.  In other words, to infer that culture accounts for the IIG’s shortcomings, we have to make heroic assumptions about the applicability of the IIG.  Something of a contradiction, wouldn’t you agree?

The critical question then is whether there is reason to believe that leaders in the Americas and Sub-Saharan Africa are playing a different game than European (and Middle Eastern and Asian) leaders.  I think there is.

For all the talk of the importance of domestic politics in War and Reason, the IIG still treats states as unitary actors.  BdM and Lalman simply assume that leaders of democracies will value certain outcomes more or less than leaders of other regimes.  No meaningful decisions made by actors within the state.  The possibility of civil violence is assumed away.  That’s not problematic in and of itself, but it tells us something about what we can and cannot infer from Bennett and Stam’s results.

The following graph (click for larger image) displays the relative rate of civil and interstate war by region, as indicated by the latest release of the Correlates of War data set.  Each bar depicts the number of wars of each type fought in each region as a proportion of the number fought in the region most prone to that type of war. 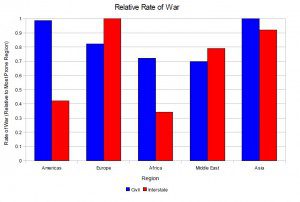 Notice that the Americas and Sub-Saharan Africa, the two regions that most defy the expectations of the IIG, have experienced fewer than half as many interstate wars as Europe.  Though each region has seen a roughly similar number of civil wars between 1816 and 2007, the risk of civil war far exceeds that of interstate war in the Americas and in Sub-Saharan Africa.  In Europe, the Middle East, and Asia, leaders have historically faced threats both foreign and domestic.  Granted, we’re speaking in sweeping generalities here — there is significant variation within each of these regions that we’re overlooking.  There’s also significant variation over time that we’re ignoring.  But if we’re going to generalize about entire regions, it makes more sense to conclude that the reason why the model developed in War and Reason fits Europe better than other parts of the globe is because it focuses exclusively on international interactions than because it fails to account for cultural differences in preferences.  That’s not to deny that culture is important.  It is.  But until we know more about the observable implications of game-theoretic models in which actors simultaneously face some risk of both civil and international conflict, we won’t really know how much of the discrepancy between our theoretical expectations and our empirical observations owes to culture.

I know a few people working on such models.  In future posts, I’ll discuss some of their work.

**This claim is patently false, but we all know that the existence of game theoretic models that account for [x] is not a sufficient condition for preventing people from claiming that game theory does not or cannot account for [x].

***To their credit, Bennett and Stam do not entertain the notion that non-Western actors are less rational than their European counterparts.  I have heard others interpret their results in this way, and one need not be a rational choice apologist to find such claims to be both offensive and disturbing, but Bennett and Stam only argue that non-Western actors hold different preferences.

I find your lack of faith…disturbing