A few weeks ago we saw a nasty eruption of the should “progressives vote for Obama” debate–prompted, ironically enough, by a libertarian columnist. My reaction at the time was rather short. But I feel moved by Russel Arben Fox’s explanation of why he’s voting Green, albeit in Kansas, and the ensuing discussion at LGM, to say a bit more. Note that I’ll focus on the left-wing variant, but my comments apply equally to the right side of the spectrum.

What nags at me about the standard defense of “voting your conscience” is this: it often depends upon assuming that other people with similar ideological preferences aren’t going to do the same (I’m talking specifically about people who share Russel’s position that they would rather see Obama elected than Romney, not the “heighten the contradictions” crowd). Consider the following simplification. 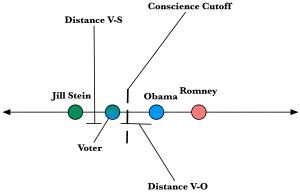 Voter declares, in essence, “I can’t bring myself to vote for Obama. Obama’s policies are a bridge too far.” In essence, Voter’s argument is that:

It isn’t simply that Voter prefers Jill Stein’s policies; Voter has a threshold beyond which he cannot stomach voting strategically. We’ll call that a “conscience cutoff.”

The problem, as I see it, stems from what would happen if we universalized Voter’s behavior (the “voting imperative”). Voter’s argument implies that everyone else beyond the “conscience cutoff” should also vote for Jill Stein. But if they did so, Obama would face a large enough defection from the left to jeopardize a reasonably close election. So Voter is relying on others to behave, on his own terms, “immorally” in order to allow him to (1) take a moral stand and (2) render his behavior irrelevant to the electoral outcome. Or, put another way, you’re counting on others taking the “conscience hit” to afford you the luxury of “moral” behavior.

I’m not sure if this argument applies to, for example, a progressive voter in Kansas. I suspect that it does, but am not confident that my (hasty) reasoning holds up. Here’s the pitch. The extension of the reasoning to the principled right might narrow the gap between Obama and Romney such that universalizing Voter’s calculation would then cost Obama a shot at Kansas’s electoral votes. So even if Russel restricted his reasoning to “safe Romney” states, it still follows that his ability to cast his ballot in good conscience rests on writing off the moral agency of most other voters.

Caveat: I start from a somewhat unsympathetic position. I’m further to the right than Voter; voting my conscience does not mean that I would vote “Green.”