Three Things I’d Like to Hear During Tonight’s Debate 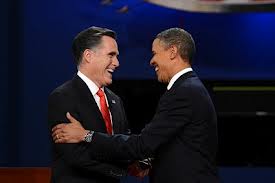 I’m guessing we’ll get more of the standard fare tonight: that the Benghazi attacks were bad; that Iran has to be deterred (will Romney bring Bibi’s bomb sketch?), that Syria is tragic, that the Arab Spring is scary, and that China and Russia are both really mean.      Afghanistan will get some attention, Iraq almost none.    Apparently, Bob Schieffer is not going to address a broader list but if he does, here are three issues I’d like to see addressed by the two candidates:

1.   The debt, budget deficits, American hegemony, and American consumption are inextricably linked — which means America’s military and foreign economic policy are linked.  An enduring feature of America’s post-War II position is that we consume more than we produce and we rely on American troops to help us sustain access to energy, raw materials, cheap goods, and credit.  In the 52 years since 1960,the US has run fiscal deficits in all but five years (once during Vietnam after Johnson’s surtax to fight in Vietnam and four times during the Clinton era amid the information technology revolution).  1975 was the last time the United States had a trade surplus.  We consume roughly 1/4 of the world’s energy supplies and disproportionately consume more of the world’s resources.    Sustaining these consumption habits requires extensive and expensive American engagements abroad.  American “national interests” span the globe as a result.  We spend roughly half of the world’s expenditures on defense and national security and we have military personnel in nearly 150 countries –albeit only a handful of troops in most of those countries.   We all know this is not sustainable.  We can’t curb our global military presence without curbing our consumption patterns. What to do?

2. The world’s challenges are increasingly more complex and uncertain and the ability of the United States to control or manage events is limited.  Iraq and Afghanistan demonstrated the limited utility of force, the 2008 financial crisis demonstrated the vulnerabilities of American economic leadership, the Arab Spring demonstrated the limited ability of the US to understand and control dynamic events.     Today, American power is in relative decline as other nations become wealthier and exercise greater political, economic, and diplomatic initiative in regional and global contexts. The liberal/neoliberal international system that the United States helped create after World War II to organize and manage global politics is changing.    The growth and density of transnational interactions and transactions coupled with the growth and increasing influence of international institutions and non-state actors means we live in a world with more overlapping actors with diverging views.    What to do?

3.  The Untied States and the world face a series of challenges — environmental degradation, climate change, rising global inequality and entrenched levels of poverty, and demographic stress — that will produce increasingly more acute stress and will become increasingly more difficult to address over time.  How can/should we prioritize these in the context of an American politics that can’t look more than a month ahead?  What to do?

Announcing the 2013 Blogging Reception and Awards at ISA