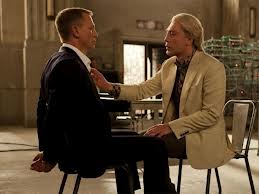 The James Bond movies aren’t the first place most would look to learn about masculinity; it’s an action movie, the special effects are always amazing, and most of us just leave the gender analysis at home…BUT just humor me for one scene. In my view the best part of an otherwise mediocre movie (sorry super-Bond fans!) is when Bond is confronted by the ultimate villain, Silver (played spectacularly by Javier Bardem). Silver is a unique antihero, he meditates, he often speaks in a high pitch voice, he giggles, in many ways he is- well- effeminate. In his intro scene he snuggles up to a handcuffed Bond, fondling his chest and stroking his leg, challenging him to recall if his training has taught him to deal with this type of advance. He teases Bond that “there’s a first time for everything.”

For an action movie, this type of homo-erotic interaction seems rare. The viewers are held in suspense wondering what to think of the villain and how the hero character will handle this apparent challenge to his masculinity. Of course, Bond rises to the occasion (unfortunately there is no hero-villain love scene, maybe we’re just not there yet). Bond retorts back, “what makes you think this is my first time.” In that moment, Silver is taken aback and the audience seems to relax. By keeping his cool and lobbing the advance back to the villain, Bond’s masculinity seems to be not only reaffirmed, but in some ways enhanced. How did a male on male flirtation lead to masculine enhancement for the characters?

James Bond has always been a multi-faceted male-hero and exemplifies a complex ideal of masculinity. Don’t get me wrong, Bond also has his share of one-dimensional features too- he still has meaningless affairs with largely nameless and personality-less gorgeous women (it’s a Bond movie, after all- balance your expectations accordingly). All too often hero/hyper/military masculinties are defined in simplistic terms: as the antithesis of feminine. We tend to imagine that the less feminine a character or person is, the more likely they are to be described as masculine. This understanding is completely disconnected from reality- who fits the ‘completely non-feminine’ ideal other than Rambo?

In fact, as Aaron Belkin argues in his analysis of military masculinity in his book Bring me Men, masculine ideals require contrasts, contradictions, and engagement between typical feminine and masculine characteristics. He says, “the production of masculine warriors has require those who embody masculinity to enter into intimate relationships with its unmasculine foils, not just to disavow them.” He explains that soldiers are often sent contradictory messages about gender values and expectations (ie seeing emotion as week yet valuing controlled emotion as a sign of honor/respect; valuing heterosexuality yet using homo-erotic activities to initiate members and embracing practices like writing “bend over Saddam” on missiles).

So there you go, Bond and Silver gave us a little lesson in complex masculinities. Even 007 knows that gender is complex. It is Silver’s slippery gender identity that makes him interesting, believable, and commanding. Bond’s comfort and engagement with male on male flirtation is titillating, unexpected and somehow makes him seem sexier and more…manly (although I suspect most of my fellow pop-corn eaters didn’t spend much time thinking why). For both characters, their status as heroes and villains is satisfied and enhanced by the interaction.